And Into the Fire 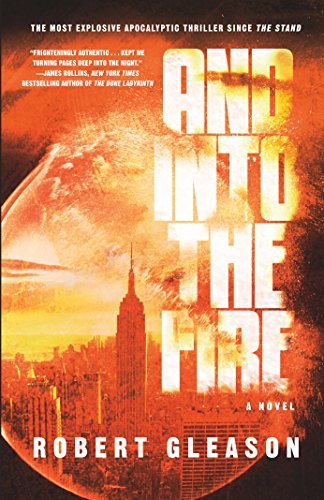 The nuclear industry, its dangerous shortfalls and, subsequently, its potential as a target for nuclear terrorism is clearly a subject book editor and author Robert Gleason has made it his business to know a great deal about. And that knowledge has been shaped in And into the Fire into a terrifying apocalyptic vision of what we could face on the not-too-distant terror horizon.

Journalist Julie “Jules” Meredith and her college-buddy Elena Moreno, head of the CIA desk in Pakistan, discover a network of Islamist terrorists who are intent on targeting three U.S. cities with nuclear weapons.  Luckily, their back catalogue of ex-boyfriends and family members includes a former exchange student who, though still in touch via encrypted emails, is now a mercenary doing special ops for the Pakistani Special Forces, as well as a brilliant and super-rich hacker, a “deep throat” source buried within the terrorist group, and a hard core newshound sister who also flies helicopters.

Phew, thank goodness. We’re on to a winner here—how can this little gang not expose and defeat these wily terrorists? Well, the major stockholder in the news outlet Jules works for is the Saudi ambassador— the richest man in the world—and funding the terrorists, so we’re out of luck there. Ah, but if the media won’t play ball, Elena is CIA: surely she can haul the President of the United States of America on to the case?

But no, the corrupt POTUS has milked billions from untraceable offshore deals with this same rich, wily foreigner. The POTUS is more concerned about being exposed as corrupt and its effect on his popularity ratings in the up and coming election than his people. Wow, this is such a far-fetched plot strand.

Agents of both the government and the terrorists pursue Jules and Elena, determined to shut them up for good as they race to save the country from the devastating nuclear attacks. But our heroes live to fight another day and baddy-bodies are strewn up and down the U.S. as their white-knuckled race against the clock continues to the bitter end—a very bitter end.

There is an inordinate amount of this story recounted through somewhat clunky, expositional dialogue, and too much repetition of a song or anthem about the apocalypse. While we have full, introductory descriptions of what our characters look like (particularly the female ones, who all seem to have waist-length manes of hair and wear six-inch heeled shoes) we don’t seem to get beneath the “derrieres” and “long-legged, hip-swinging” bravado of our heroes as they arrive on “supercharged ninja bikes” or “fully tricked-out news choppers.”

This is certainly a page-turner of a book, but with so many strands to the plot one sometimes finds oneself turning the pages backward to recap.  Perhaps three simultaneous nuclear attacks was a tall order—for Gleason, as well as the terrorists—though of course 9/11 saw devastatingly similar synchronicity.  It is in the “afterword” at the end of the book when the tale has been told that Gleason really brings home the terrifying truth behind his work of fiction. Perhaps the cover should carry a warning: “not to be read by terrorists.”