And in the End: The Last Days of The Beatles 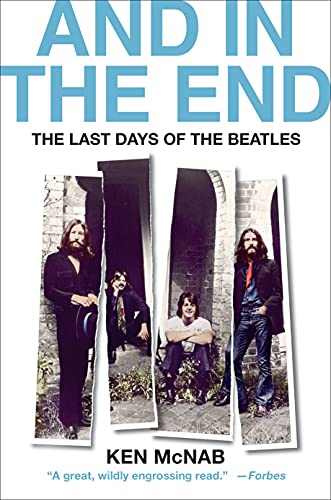 “The Beatles were not just a band but a magic act.”

Mick Jagger has a quote about The Beatles that pretty much sums up their existence: “The Beatles were so big that it’s hard for people not alive at the time to realize just how big they were.”

Amen to that. And if you were alive at the time, you get it. There was nothing but Beatles day and night, every day. Radio stations played only their songs. Department stores sold Beatles wigs, shoes, jackets. The arrival of a new doubled-sided single by the group eclipsed everything. Their lyrics were poured over as if they were messages from another civilization. There is simply nothing comparable today.

And all that explains why it’s so hard for any writer to make current day readers understand why he’d want to tackle yet again the magnetic pull of John, Paul, George and Ringo. Literally every moment of the Beatles existence has been combed over by the best journalists out there. There is almost nothing new to say.

Ken McNab, author of And in the End, is the latest journalist to give it a go, and he does a very credible and worthwhile job of making The Beatles’ last picked over year quite interesting. His conceit is to tackle the Beatles last days they existed as a foursome creating music that would last forever even as the group itself was circling the drain.

McNab, to his credit, has tracked down some people who crossed paths with the boys in that fateful year of 1969. And yes, these folks sometimes have some good yarns to spill.

One standout story is the recording of “Give Peace a Chance” in a hotel suite in Montreal. The now-iconic song was “created” by record producer Andre Perry who entered John and Yoko’s room carrying a 4-track recorder and a bag containing four microphones and two speakers.

“Seconds later,” McNab writes, “he was face to face with John Lennon and Yoko Ono in a room swarming with people that included scandal-hungry journalists, celebrity liggers, prurient hangers-on and mantra-chanting devotees from the Canadian chapter of the Radha Krishna Temple. ‘It was complete chaos,’ recalled Perry, then Montreal’s most in-demand record producer and a man with impeccable credentials.”

John was very chill that day. He watched Perry set up the mics and then said, “That looks fine to me.” The lyrics to the song were pinned up “on huge signs on the walls, like hippie graffiti.” There were some 50 people in the room including Tommy Smothers, Timothy Leary, Dick Gregory, and Allen Ginsberg.

One can imagine the daunting challenges in trying to get some reasonable sound from such a room with such a gathering of so many people. One of the few actual singers in the room was Petula Clark. She was hurt by an audience reaction to her performance in that Canadian city and sound out solace from, who else, but John Lennon whom she barely knew.

There was no security in those days, and Clark waltzed into John and Yoko’s room where John threw his arms around her and gave her a bit of advice on how to deal with adversity, advice that she does not repeat to this day. But Clark stuck around for the recording of John’s song.

She always thought she was on that famous recording, but Perry reveals how unlikely that is. After recording the song, he went to his studio and listened to it. John’s voice and guitar shone through but the sound from the backup singers was horrendous, mainly because of the poor setting it was recorded in. Perry kept what was good and then pulled in some professional backup singers, banged on a garbage can, put some echo on the record and brought it back to John. “That’s fantastic,” he said and so the legendary peace chant was born.

Stories like that are the reason to read McNab’s book, and there are quite a few that will make even the most knowledgeable Beatles fan smile.

The problem with dissecting the year 1969 is that McNab must deal with odious Alan Klein, the businessman whom only three of the Beatles trusted. Paul famously never gave the American an inch. If one never reads about Alan Klein again, it will be too soon—although McNab does a credible job. It’s just a very tired story.

Everyone knows how vitriolic that last year was among all the members of the group except perhaps Ringo. John and Paul had major problems, and George was sick of being the forgotten songwriter. The most amazing thing is that the Beatles alchemy—despite all fights and arguments—shone through and the boys produced what is arguably their finest album Abbey Road. Producing that gem in the middle of all they were going through proves, once again, that The Beatles were not just a band but a magic act.