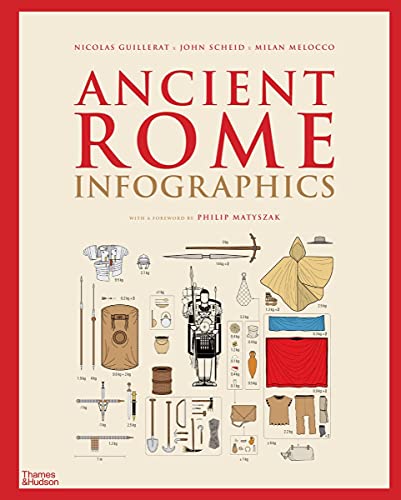 “Besides offering a rich source of information, Ancient Rome: Infographics presents an incredible example of visual intelligence, of how we learn by ‘seeing’ facts as much as reading about them.”

The authors of Ancient Rome: Infographics have found a very clever way to organize complicated information. They cover an enormous amount of ground using charts, maps, graphs, and other ways of presenting facts through images. The book opens with an explanation of why they chose Rome to focus on in the first place, admitting the importance of other empires at the same time:

“The Roman empire was both huge and diverse, yet in this the empire was not unique even among ancient empires. A few centuries previously, the heirs of Alexander the Great had ruled an empire so vast that it stretched from the Mediterranean to Afghanistan, and contemporary empires in India and China were even more populous. Yet the Roman Empire deserves our special attention, for no other state has so affected the later development of modern Europe, and for better or worse, Europe has changed the world.”

Rome’s special gifts lay in the way the state expanded the notion of citizenship: “People could become Roman citizens while simultaneously remaining citizens of their own community.” In fact, being “Roman” was something people clung to in far-flung corners of the empire. It meant an organized society of laws and infrastructure (roads, aqueducts, walls, even fire brigades). There was much to be gained by being a Roman, and some of the empire’s greatest citizens came from outside of Rome itself, from places as varied as Spain, North Africa, Greece, and what is today Serbia (for example, Constantine the Great).

After a brief introduction of Roman history and its survival, the authors describe the subjects covered in their infographics. This isn’t a book in which you’ll meet emperors and hear dramatic stories about them. There are no philosophers, writers, or artists, though Rome was rich in all of these. Major battles are included in the military section, but not the history behind them. The authors leave the stories out of the book, focusing instead on the ingredients behind the stories. Doing so allows them to create a powerfully useful tool to understanding those stories.

The data—and that’s really what all of this is, an enormous amount of actual information gleaned carefully from original source material meticulously sifted through by the authors—is divided into three sections: The Lands and People of the Empire, Government, Worship, Social Needs, and Rome’s Military Might.

The first section covers the expansion of the empire, the different populations making up Rome, the roles of women, the distribution of wealth. The second section focuses on the political system, how laws were made and enforced, religion, monetary systems, and trade routes. The last section not only describes the military ranks, training, equipment, but also military tactics, including specific battles, both on land and on sea. By using maps, charts, and other graphics, the authors manage to organize all these bits into a coherent vision. What would take up pages of description is shown in one carefully designed map or chart. Besides offering a rich source of information, Ancient Rome: Infographics presents an incredible example of visual intelligence, of how we learn by “seeing” facts as much as reading about them.

Taken all together, the pages provide a massive amount of detail about daily life in all the many lands of the empire. There is far too much to read through. This is the kind of book to savor bit by bit and an incredible resource for anyone interested in an empire whose traditions still affect our own, from carrying a bride over the threshold to calling a legislator a “senator.” We are all inheritors of Rome in some way. This book does a brilliant job of showing us just how much and in how many varied ways.