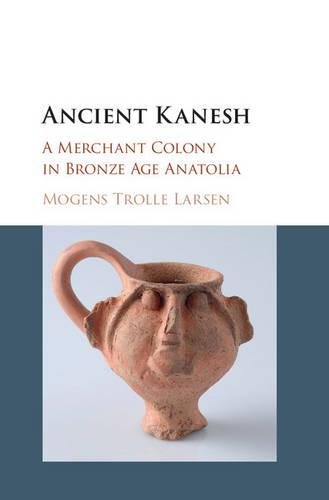 Morgens Trolle Larsen’s Ancient Kanesh: A Merchant Colony in Bronze Age Anatolia tells the history of the exploration of a city “of the first attested commercial society in world history” and one “that has left us an enormous amount of textual evidence.” Ancient Kanesh takes the reader through the real world of exploring ancient history, areas of language, material culture, etc. that has too few experts and in which knowledge often goes unshared between the different fields.

Kanesh’s documents were baked clay tablets that dealt with largely legal and commercial matters. Because these Assyrian colonists concerned themselves with long distance trade, these archives open up a special view of culture, economics, and geography over 3,500 years ago. Chapters of Ancient Kanesh discuss such subjects as cultural interactions, merchant families, and long distance trade.

Even when created today, such sources tell a great deal about a people, at the least through the mundane matters and materials of their lives. Personal issues creep into the written conversation, however, and the commentary between a father and son, for example, comes across like an ancient soap opera played out in the present.

In a world of physical history that left us, in some instances, no documentation to make the people seem alive, Kanesh is one of the great exceptions. As Larsen writes in the introduction, this work provides an all too rare new vision of understanding that “together, texts and objects represent the reality that once existed.”

Here the reader can understand the technical aspects of that world but also something of the fears, hates, loves, and needs of the individual then and even for now, “in some instances we can literally walk from house to house, knowing who once lived here and what their names were.”

The tablets, found in the village of Karahöyük in east central Turkey by 1881, initially were indecipherable and the language was unidentified. They came from a land of a vast number of exotic ruins from an unimaginably ancient past. Czech philologist Bedrich Hrozny, one of the great forgotten scholars but an example of how not to excavate, began unlocking the history of the tablets and Kanesh in 1925. His discoveries are just one of the tales of adventure and discovery in this work.

The language eventually proved to be Old Assyrian and the writers were traders in copper, gold, silver, tin, and textiles from markets across Anatolia, not the usual conquerors, kings, etc. whose misleading self-important writings usually alone survive. Although hugely valuable, these some 23,000 texts from Kanesh are only part of “round a million” Assyrian texts over 3,000 years that have turned up so far.

The men and women who wrote to their friends and family in this city were often candid, sharing news, and frequently personal. Information from this source even helps in trying to update and correct guesses made in the past about ancient chronology. The tablets explain in detail the previously misunderstood complex reality of government and political power in the Assyrian world.

Much remains to be done be done on the site. Its artifacts are also major finds that have told academia so much about a lost world. Who, however, will do that work?