The Anatomy of Violence: The Biological Roots of Crime 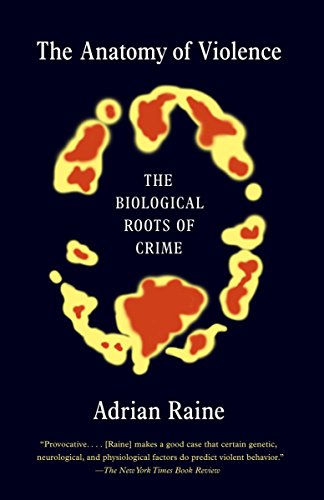 “. . . an astonishingly accessible account of all the major elements . . . related to crime and human violence, leading us to the conclusion that yes, some people are natural born killers.”

Is there a killer gene?

Specifically, do certain people have a genetic or biological predisposition toward committing acts of violence and even murder?

At first glance, the notion that one book could answer this question effectively seems impossible. Let’s face it, serial killers are rarely caught through profiling, and people who engage in bloodshed certainly cannot be categorized as sharing any specific brain type.

Amazingly, in The Anatomy of Violence Adrian Raine manages to dissect the brain of a psychopath, to examine what he calls a “broken brain,” by looking inside the minds of violent offenders—via PET scans, identical twin studies, and adoption studies—offering empirical evidence that is hard to dismiss.

The book reflects a gargantuan attempt to make the biological roots of violence comprehensible to a layperson. In doing so, it presents evidence that makes psychopathic behavior (dare I say?) understandable.

This groundbreaking book documents the genetic research, illustrating exactly how impaired brain areas are connected to known serial killers, to obscure killers, and to those with violent predispositions.

Taking the reader on a cautious journey, the author is careful to present historical and evolutionary case studies that allow him to successfully argue that through neuroscience and the study of brain scans of psychopaths, we might conclude that the biological roots of violence are real.

Never before has a “map of the criminal mind” been written about so convincingly. Yet here Mr. Raines engages us in large scale surveys of violent offenders, coupled with historical findings of the world’s top psychopathy researchers, to lay out the “patchwork” of a dsyfunctional brain that puts us squarely on the threshold of understanding that abnormal brain systems are indeed related to the specific traits we see in psychopaths.

As for linking violence to genetic or biological brain abnormalities, The Anatomy of Violence makes it perfectly clear that while there is still no proof of a killer gene, criminals have clear deficits in certain brain regions. The book also makes the case that by moving into the deeper regions of the brain—areas such as the hippocampus (which regulates emotion)—there exists empirical evidence to suggest brain abnormalities seem to be directly related to specific traits that we associate with psychopaths: lack of empathy, impulsiveness, and lack of genuine emotion, to name a few.

As we progress though the complex data on the roots of criminal behavior, we are taken step by step into the neurological and biological elements that are “different” or “abnormal” in these dysfunctional brains—as well as in the resting heart rates—of known violent offenders.

Upshot? Through biological and genetic testing, scientists can now document a basis for acts of criminality originating from the brain and the biology of a human being.

This book presents overwhelming evidence about persons known to be violent, aggressive, or even murderous either at birth or via a head injury. Is this proof that there’s a genetic code for killers? No. But does it seem to be evidence that there’s a “killer dysfunctional region” in the brain?

Suddenly I am convinced that the answer is yes.

Moving anatomically from the cortex of the brain (the surface) into the deeper regions of the brain, the author goes one step further to take readers into the middle of the brain, the corpus callosum, which houses 200 million nerve fibers that connect the two cerebral hemispheres.

When studying this particular region in psychopaths, Mr. Raine provides a stunning revelation: Scientists can now measure the corpus callosum and have concluded that the volume of this brain area is much bigger in size and volume in psychopaths versus the average person.

How does this relate to psychos or to serial killers? To put it simply, when studying this thin body of white matter deep in the center of the brain, researchers have found that because this connective brain area is much bigger inside the brain of psychopaths, there’s reason to believe that there’s too much “cross-talk” inside the brain of a psychotic person, and that “too much connectivity” might allow a psychopath to overuse the left hemisphere of the brain (the area responsible for language processing). This also helps explain why these persons may be so adept in verbal skills, often possessing an extraordinary gift of gab.

This “cross talk” between the two hemispheres of the psychotic brain might also explain why we notice the how psychopaths have a special ability to charm and manipulate—a very interesting tidbit to ponder.

Combining all of these tidbits, these provocative sketches about the nature of criminality, Adrian Raine offers us the most compelling look to date at the connection between human genetics and human acts of violence, taking on the legal and ethical conundrum that these findings might create. His book suggests that a genetic criminal link may no longer be a subject for debate but an actual scientific fact.

The Anatomy of Violence will convince even the most skeptical that there is a genetic or biological cause for the violence exhibited by psychopaths across all cultures. Without doubt, the book should be required reading for any student of criminology.

The Anatomy of Violence is an astonishingly accessible account of all the major elements— environmental, social, biochemical, psychological, and neurological—related to crime and human violence, leading us to the conclusion that yes, some people are natural born killers.

Aphrodite Jones is the New York Times bestselling author of eight true crime books. Currently the host of the hit series True Crime with Aphrodite Jones on Investigation Discovery, Ms. Jones has had a successful and lauded career as an investigative crime reporter for over 20 years.