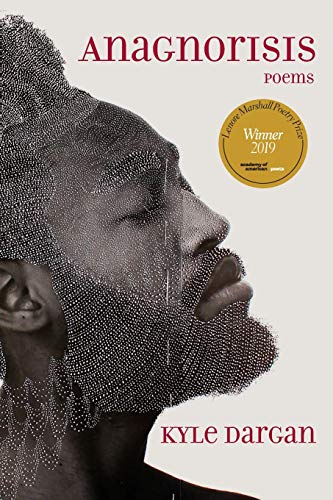 In a diverse collection of poems about politics, civil rights, gentrification, and gun control, Kyle Dargan offers fresh perspectives on unalienable social challenges in Anagnorisis. He accurately captures life in Washington, DC, and its sister city, Beijing, in poems empowered by cultural images and social commentary.

Dargan’s subjects range from Barack Obama’s face on toilet paper, to the Michael Brown shooting, to a Chinese marathon, and even to an awkward Korean meal with karaoke, strobe lights, and costumed waitresses. Dargan even incorporates Chinese characters into his poetry, to fortify meaning and grab attention with stark visuals.

Here are some visuals from “Americana,” a poem about the loss of a friend and presidential toilet paper: “And yet, you do not see me wishing for the means / with which to scour / the President’s grayscale face // against my anus. The postwipe sarcasm—Thanks, / Obama—as a gesture / of the body // cleansing the body. Though didn’t he run / to clean and change / a soiled nation’s bottom?”

With keen wordplay and ironic humor, Dargan successfully uses the toilet paper as a metaphor for complacency and disgust in “Americana.” It symbolizes the passage and disposal of time, a time in which loss has occurred, yet we still must clean ourselves and persevere. It also must be noted that the stanzas are shaped like rolls of toilet paper, thus combining the content and container to concrete the poem’s meaning.

Dargan clearly knows poetic craft, as evidenced in “Death Toll.” Here are the opening two couplets after the poem has cited Barack Obama’s Somehow, this has become routine: “This road has surely paid for itself by now, / but let’s toss some more bullets in the bucket. // Clipped bodies pile up, obscuring the medians, / where we toss our spare bullets in the bucket.”

“In the bucket” is repeated four times in this poem. It is only six sentences long, yet the repetition creates a “toll” on the reader, thus creating a ceaseless sense of sorrow in a master-craft poem. It is fixed. It is routine.

It is impossible not to read “XXII. Devils Have No Fans” multiple times. Here are some words from the first three lines: “Their shirts say I Wish You Were / Hero, say Cock Whore, say Open / Your Mind, say Fuck Off.” The poet directly quotes the “exotic language” on T-shirts to create a sense of irony in this delightful poem about how the East is caught by the “allure” of crass Western culture, while the poet is challenged by deciphering and pronouncing Chinese characters.

Anagnorisis bridges cultures and challenges identities. The poems explore landscapes and take risks. Dargan intentionally provokes mixed reactions with the collection’s political content, content which is satirical, profound, and exact. And all readers will admire Dargan’s ability to challenge differing points of view, via careful use of images, which is paramount to strong poetry.