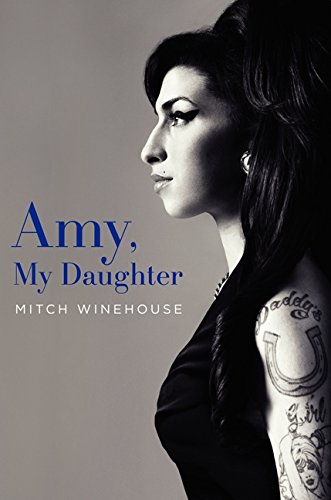 Amy, My Daughter, the new memoir of the late singer/songwriter Amy Winehouse written by her father Mitch, is a rather well wrought, brief remembrance artificially inflated into book length.

Readers who are willing to set aside their critical faculties and ignore the occasional cul-de-sac of self indulgence will discover the portrait that emerges is one of an artist at her most vital, filled with as mystifying a blend of humor, ill temper, originality, self destruction, charisma, self consciousness, emotional transparency, and pure talent as the world has not seen since Judy Garland died way too young as well.

The story is well known, as it was well reported as it unfolded: Amy Winehouse, already a singing sensation in her own native Great Britain and across much of Europe, burst on the scene here in the United States with the release of her second album Back to Black. This album featured the once joyous and wickedly funny (and now, in retrospect, prescient and downright sad) anthem “Rehab,” whose infectious hook, “They wanted me to go to rehab, but I said no, no, no,” made it the song of the summer for 2007.

That song was everywhere that summer, as was the image of Amy herself, with her black “Ronette” beehive, her Egyptian eyeliner, and her tattoos. (As Amy, My Daughter reveals, one British journalist, seeing Amy Winehouse in her full drag for the first time, wrote that it looked to him to be a combination of “Ronnie Spector and the Bride of Frankenstein.”)

She would go on to win a staggering total of five Grammys for her album Back to Black (the most every awarded to a foreign artist). As her fame increased, Winehouse turned first to drugs—marijuana (or, as Mitch Winehouse anglicizes it, “cannabis”) and then heroin and crack cocaine. Later, when she overcomes her drug addictions, comes alcohol.

Mitch Winehouse has a number of points he wants to get across to his readers. First and foremost is the person who, in his opinion, needs to be held responsible for his daughter’s death is one Blake Fiedler-Civil, who was, in rather short order, the singer’s boyfriend, husband, and ex-husband, as well as the inspiration for many of the songs on her award-winning album. Or as Mitch puts it:

“It occurred to me recently that one of the biggest-selling UK albums of the twenty-first century so far is all about the biggest low-life scumbag that God ever put breath into.”

As proof, Mr. Winehouse quotes Blake from an article in the News of the World as admission:

“I dragged Amy into drugs and without me there is no doubt that she would never have gone down that road. I ruined something beautiful. I made the biggest mistake of my life by taking heroin in front of her. I introduced her to heroin, crack cocaine and self-harming. I feel more than guilty.”

Much of the book centers on Amy Winehouse’s struggle to regain and retain her sobriety, first while living with her husband and later both while he served a prison sentence for assault and after their divorce.

Completely and unapologetically told from Mitch Winehouse’s understandably biased point of view, Amy, My Daughter creates for the reader a scrapbook of images of the singer, from early childhood:

“Our daughter came into the world quickly, popping out in something of a rush, like a cork from a bottle.”

“I often collected the kids from school. In those days I had a convertible, and Amy would insist I put the top down. As we drove along, [her brother] Alex in the front alongside me, she’d sing at the top of her voice. When we stopped at traffic lights she would stand up and perform. ‘Sit down, Amy!’ we’d say, but people on the street laughed with her as she sang.”

To memories of her all-too-brief years of fame:

“When Tony Bennett announced she’d won Record of the Year we all rushed on to the stage and hugged— [my wife] Janis, Alex, Amy and me. ‘I can’t believe it, Dad,’ Amy said, ‘Tony Bennett knows my name.’”

And yet, nothing, not recent history nor news headlines nor the narrative of the book itself prepares the reader for this simple declarative sentence:

The thought of it is still a kick in the gut. Can it be such a short time ago and could she have really left us at age twenty-seven?

The portrait that emerges of Mitch Winehouse’s subject is one of the loveable misfit, the turbulent artist, the one-of- kind offspring for whom battles are fought and won.

As such, Amy, My Daughter is a fitting tribute, heartfelt and heart rending, as a parent’s guilt over the fact that despite his best efforts his child is gone forever vibrates off every page.

Mr. Winehouse is no writer, but he is a parent with a story to tell, and, in telling it, he holds nothing back: not guilt, not blame, not the need to rationalize his own actions when they seem selfish or lackluster. In doing so, he paints two pictures, one of his daughter and the other a self-portrait. Both, in the end, are equally compelling.

And the dynamic of love and loss presented here makes for compelling reading and furthers our understanding of addiction and the family turmoil it creates.

Note: All author’s profits will go to the Amy Winehouse Foundation, which has been created to assist British youth with issues associated with drug and alcohol abuse.