AMORALMAN: A True Story and Other Lies 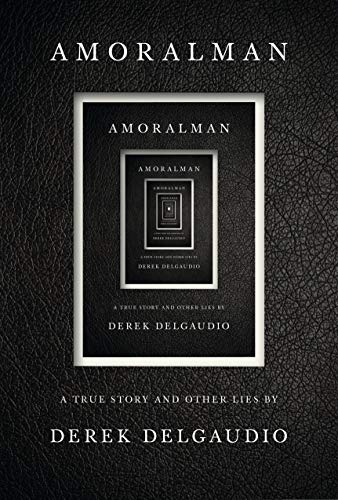 Secrets are at the center of Derek DelGaudio’s memoir A Moral Man. There are the secrets he chooses to keep and the ones he decides to reveal. In DelGaudio’s telling, family secrets lead to larger secrets and ultimately to his decision to cheat at cards. It is an interesting premise, and once DelGaudio gets into his journey with sleight of hand tricks it works. What is harder to follow is the family back story DelGaudio offers early on. Real life is less real than what happens when magic enters the narrative, it is the magic that makes DelGaudio’s words magical.

A Moral Man begins not with magic but where magic leads DelGaudio, to card cheating. DelGaudio is working as a card mechanic, a dealer hired by the house to cheat the players. He reveals the secrets of the industry in a matter-of-fact way that makes them seem ordinary. Yet he never loses track of the fact that what he is doing is in fact far from ordinary as well as morally and legally questionable.

“The best way to briefly describe the experience itself is to say I lost sight of reality just enough to glimpse the truth.”

This is where DelGaudio is at his strongest. What comes next is a little more confusing. DelGaudio finds an old notebook of his and uses this as a launching point to delve into his family background. The first truth he reveals—that his grandfather unknowingly worked for the mob—seems as staged as the card game that preceded it. With few details, the family mob connection sounds almost too fantastic to be true.

Trite phases instead of specific details also weaken his descriptions of his father who had the “the weight of the world is on his shoulders” and his mother who was “a girl from the wrong side of the tracks.” Deeper insights come when DelGaudio is in grade school and his mother reveals she is a lesbian. After DelGaudio shares this news with a friend he is surprised to find his friend turn on him.

“My mother had taught me the value of truth, but she neglected to teach me the cost.”

The cost is what convinces him to keep his mother’s sexuality a secret, which in turn leads to his fascination with magic and sleight of hand tricks. It seems a bit of a stretch, but maybe when DelGaudio was a child, it wasn’t. The problem is we don’t know what era we are in. DelGaudio is a renowned performer so fans of his work may already know his age, but those less familiar with him would benefit from this context. Broader links between secrets and magic work better.

“Secrets enter the system like a drug, causing aberrations in the body and clouds in the mind.”

Once DelGaudio gets into magic his writing offers the details earlier parts missed. As a narrator he does an excellent job guiding the reader through an unfamiliar world, explaining terminology and challenges, such as when he developed a telltale blink from practicing moves in the mirror too long. The narrative really gains momentum when DelGaudio introduces other magicians, which in turn leads to the man who taught him how to cheat at cards. Unlike the characters in his early family background, his mentor is fully developed and nuanced.

“He was simultaneously the most honest man I knew and the most artful deceiver I had ever met.”

DelGaudio uses a road trip with his mentor to reveal his mentor’s path to cheating alongside his own. He discovers just how widespread cheating at cards is and how difficult it is for him to live with the lies he is forced to tell.

“A brief conversation felt like a stroll through a field of verbal landmines.”

Cheating is not for DelGaudio, yet he is still a performer, and as such he keeps the surprises coming until the very end.