Among the Red Stars 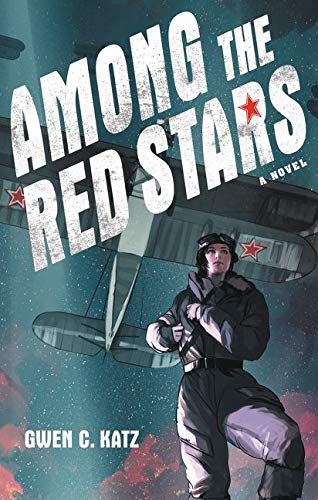 “gripping and entertaining, and suitable for both its teenage target audience and adults.”

A viewpoint we don’t get very often in American literature is that of women aviators in general and women combat aviators in particular—especially on the Russian side during World War II. In today’s political climate it’s hard to remember that the United States and the Soviet Union were allies against the Nazis. Author Gwen Katz not only reminds us but enlightens us about one aspect of the Russian experience in her debut novel, Among the Red Stars.

Based on the real Aviation Group 122, Katz has fashioned the tale of the young Russian woman Valka, a pilot with the infamous “Night Witches,” a night bomber regiment who terrorized German forces in the dark. They flew open biplanes made of wood and canvas that had been designed as trainers, not active war machines, with only basic instruments to guide them. Even with these liabilities, the women were outstanding fighters and became honored war heroes.

Valka was born to fly, and her heroine was the real Russian airwoman Marina Raskova, who set a record for long-distance flight, survived a crash in Siberia, and came back to convince Stalin to form an all-female aviation group to help in the war effort. Valka joins this group and meets her idol, and the first part of the story is how she gets from her local flying club into the elite team then struggles to qualify to fight with them.

The balance of the story is her time in service, told in alternating letters between Valka and her best friend, Pasha. Pasha is a gentle and kind boy who gets drafted into the Russian army as a radio operator and sent to the worst of the fronts. He has the unusual characteristic of perceiving sounds and movements as colors, which brings a unique take on life and death to the story.

Through the narratives of these best friends, who eventually realize they are each other’s true love, we experience the war from the ground and aerial perspectives simultaneously. We also learn about the relationships between pilots and their navigators; the competition against self, colleagues, units, and the sexes in the air corps; the nature of different aircraft and their roles in combat; and differences in how American and Soviet armies perceived, rewarded, and punished their soldiers during WWII.

The trouble with war fiction is knowing from the start that people are going to die. Even if the outcome is on record, as is the case with this war, there’s no telling in a novel whether characters you care about will get killed. This builds suspense into the plot by default, and in Among the Red Stars, that suspense carries to the very end, when Pasha and Valka are reunited in battle. Not only is it against the odds that their units would end up in the same debacle, but also against the odds that either will survive.

The story pace is fast moving, a little choppy at times, but nevertheless compelling. The author balances an almost businesslike prose against the emotional devastation of war’s hardships, horrors, and waste, leaving readers appalled by the nightmare and amazed that anyone could live through it.

Valka, Pasha, and the fictional and real characters presented in the story show courage in all its colors. An author’s note at the end informs readers about the points where she took liberties with dates and facts, and where she stuck to historical accuracy. This allows the novel to be truly educational as well as gripping and entertaining, and suitable for both its teenage target audience and adults.