America's Rise and Fall among Nations: Lessons in Statecraft from John Quincy Adams 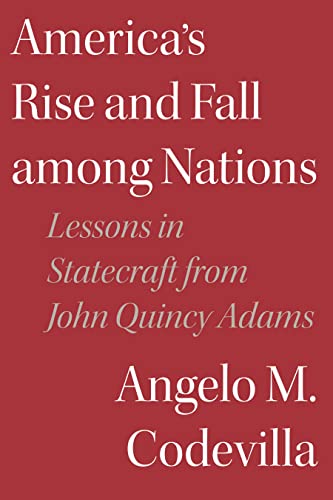 “America’s Rise and Fall Among Nations is a stinging critique of America’s foreign policy establishment and its Progressive ‘ruling class’ since 1910, and Codevilla takes no prisoners.”

When Angelo Codevilla was killed in a tragic automobile accident in September 2021, America lost one of its most profound foreign policy thinkers. A former naval officer, professor of international relations, senate staffer, and Hoover Institution fellow, he was the author of 14 books, including his last one—published posthumously—America’s Rise and Fall Among Nations, which is a blunt and unsparing analysis of U.S. foreign policy since the Wilson administration.

The subtitle of this book is Lessons in Statecraft from John Quincy Adams, who Codevilla considers America’s greatest statesman. Adams, who served as both Secretary of State (under President Monroe) and President of the United States, derived what Codevilla calls his “principles of statecraft” largely from George Washington, Alexander Hamilton, and John Adams.

“Adams shared, specified, and conveyed to his successors,” Codevilla writes, “the founding generation’s fundamental interest in preserving and enhancing America’s own character,” and is “the fount of American geopolitical thought.” Codevilla equates Adams’ legacy with an “America First” foreign policy, which is sure to inspire controversy given its association with former President Donald Trump.

Codevilla does not shy away from controversy in this book. In essence, America’s Rise and Fall Among Nations is a stinging critique of America’s foreign policy establishment and its Progressive “ruling class” since 1910, and Codevilla takes no prisoners. Everyone from Elihu Root to Woodrow Wilson to Henry Stimson to Franklin Roosevelt to Dean Acheson to McGeorge Bundy to Henry Kissinger to Bill Clinton to George W. Bush to Barack Obama to Joe Biden is on the receiving end of Codevilla’s well-targeted slings and arrows.

Washington, Hamilton, John Adams, and John Quincy Adams all pursued “America First” policies at home and abroad, Codevilla writes. So, too, did Andrew Jackson, Abraham Lincoln, and Theodore Roosevelt. After Roosevelt, however, under the presidency of Woodrow Wilson, the Progressives took control of U.S. foreign policy. And, Codevilla writes, “the Progressives’ paramount premise is precisely that U.S. policy’s proper primary concern must be with mankind as a whole, and with America only incidentally and derivatively.”

Codevilla quotes President Wilson: “The interests of all nations are our own. We are partners with the rest.” That was a huge break with the foreign policy traditions of Washington and John Quincy Adams. The founding generation eschewed sentimental attachments to other nations and sought to abstain from foreign interventions, while simultaneously preventing other nations from encroaching upon America’s interests. Those principles were the essence of Washington’s Farewell Address (which Hamilton helped draft) and the Monroe Doctrine (largely the work of John Quincy Adams).

Progressives, on the other hand, eagerly joined foreign crusades not primarily to protect America’s interests, but instead to promote abstract notions of “international peace,” “disarmament,” and “world order.” Progressives fought World War I to “make the world safe for democracy” and to institute a League of Nations to protect the peace and promote international harmony. They fought World War II for the “four freedoms” and to institute a United Nations to replace the discredited League of Nations.

And Progressives fought the Cold War to, in Codevilla’s words, “reshape the world in the image of America’s ruling class.” That is why victory was forsaken in the Korean and Vietnam Wars. There were “higher” principles at stake—those of the ruling class and their power and privileges. And much of the “ruling class” in America opposed President Reagan’s policies that won the Cold War.

Codevilla reserves his fiercest criticism for the Democratic Party establishment, which in Korea and Vietnam established a paradigm that has led to America intentionally eschewing victory in all subsequent wars. The “endless” wars in Afghanistan and Iraq are but the latest examples of the insidious nature of this paradigm. And those wars were started by a Republican president. Progressives have also promoted foreign interventions in the name of human rights and humanitarian concerns, ignoring Adams’ prudent counsel that America should not go abroad “in search of monsters to destroy.”

The Cuban Missile Crisis, in Codevilla’s judgment, was a U.S. defeat. Detente with the Soviet Union was tantamount to defeatism, especially in the nuclear weapons realm. The War on Terror accomplished the rise of a new American “security state” that is now used by the ruling class to surveil its domestic opponents. The refusal to seriously implement missile defense has left the United States vulnerable to North Korea, Iran, Russia, and China.

America’s Progressive ruling class, Codevilla claims, wants to “manage the world” instead of promoting parochial American interests. The “ruling class” identified by Codevilla is very much a bipartisan group (and includes intelligence and military officials and the media) that disdains ordinary Americans as “deplorables” and “domestic terrorists.” Populism, as manifested in the MAGA movement that supported (and still supports) Donald Trump, is the enemy that poses a danger to “democracy,” when in actuality, according to Codevilla, it endangers the power of the ruling class.

That is why the ruling class had to try to rid the country of Trump. His “America First” foreign policy threatened the power bases of the ruling class. Trump criticized NATO members for failing to pay their fair share for alliance defenses—Codevilla concludes that NATO is obsolete. Trump attempted to shift the focus of U.S. foreign policy to confront China, which would have undermined the foreign policy establishment’s policy of engagement. Trump sought to end the wars in Afghanistan and Iraq, which, Codevilla notes, the military hierarchy and defense contractors wanted to prolong. Trump sought to end or reduce subsidies to the Palestinian Authority and focus diplomacy away from the Israeli-Palestinian conflict.

More fundamentally, Trump downplayed efforts to combat “climate change” and similar multilateral policies that didn’t put America first. He conducted trade wars and promoted protectionism to benefit American workers instead of Wall Street tycoons and financiers. Codevilla, though not uncritical of some of Trump’s policies, views Trump as a proponent of foreign policies that are congruent with the principles of statecraft expounded by John Quincy Adams.

Codevilla’s book is relevant to today’s headlines. He writes that Ukraine’s independence is in America’s interest, but “is beyond our capacity to secure.” Putin is an autocrat who would like to reestablish the Russian (not the Soviet) empire, but lacks the capability to do so. NATO expansion, he writes, was a mistake—America should not look for opportunities to confront Russia where no vital interests are at stake.

China, on the other hand, poses a serious national security threat to the United States, especially in the Western Pacific, but also throughout Eurasia. And Codevilla writes that Taiwan is the “geographic (hence military) as well as political key to U.S.-China relations.” He scolds the Carter administration for de-recognizing Taiwan—calling it “geopolitical surrender.” Any serious geopolitical resistance to China, he concludes, must start with Taiwan, include an increase in our naval power, and end with effective missile defenses so China cannot deter us from protecting Taiwan by threatening nuclear attacks.

The key to a successful foreign policy, according to Codevilla, is “within the minds of America’s founding generation.” Our leaders should look to Washington, Hamilton, and above all, John Quincy Adams for eternal truths and geopolitical insights to guide American statecraft.