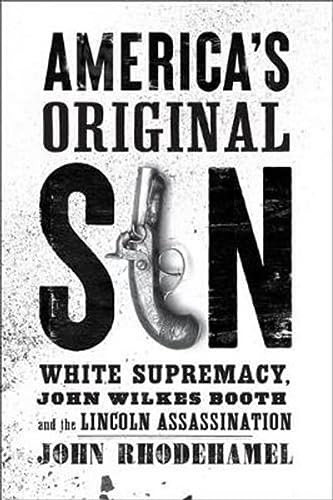 “Rhodehamel elegantly tells the familiar story of the Lincoln assassination from the view of race with engaging prose and serious scholarship.”

The first line of John Rhodehamel’s America’s Original Sin proclaims “there’s a story of what never happened that’s been told thousands of times, a story of political murder and revenge.” In the pages that follow, the author tells the story of John Wilkes Booth’s assassination of Abraham Lincoln from the view of emancipation, labor, and racism.

This historical event appears in thousands of books. So many works tell of Abraham Lincoln that the subject has a prestigious annual award. America’s Original Sin is as a dual biography of John Wilkes Booth and Abraham Lincoln set against the world of American human bondage in which they lived and died.

The story begins with April 1865, “the most extraordinary month in American history” but with the black faces and the white supremacists added to the picture. The Civil War had divided the Booth family and some of Lincoln’s clients, friends, and in-laws supported slavery, the white South, and/or the Confederate States of America. It is a major issue to the present.

Lincoln carrying out the threat of his 1862 Emancipation Proclamation to enlist black soldiers “had been almost as radical as emancipation itself.” “Fielding Black soldiers was a true revolution.” By the end of 1864, however, even Confederate president Jefferson Davis and General Robert E. Lee intended to have African American soldiers, even if in bondage and serving to protect enslavement!

In April 1865, Lincoln toured the fallen Confederate capital of Richmond in a carriage. “The jubilant crowds were almost all black.” The white citizens, almost all shuttered in their homes, had earlier seen the arrival of the United States Colored Troops, “a vision of a new reality that white and Black Virginians greeted with markedly different feelings.”

“To the millions of white supremacists . . . emancipation and the fielding of Black soldiers were despicable acts of barbarism.” Even Americans opposed to human bondage feared that emancipation would bring about a race war from the injustices done to the enslaved, “that could only end in Black annihilation.”

In this environment, explaining John Wilkes Booth’s motives proves complicated. Insanity, “is not, however, an entirely satisfactory explanation for the first American presidential assassination, indeed, the first political murder of any significance in the seventy-six years of the young republic’s history.”

Controversial patriarch Junius Brutus Booth raised his family among African Americans not in bondage in northern Maryland “perhaps the least harsh example of the institution [of enforced labor by race] that could be found in America.” “A free Black woman helped raise the Booth children,” including John Wilkes Booth. Junius rented slave farm workers, however, and the family business of theater centered on bloody Shakespeare plays where the king dies violently.

“As a boy, John Wilkes Booth came to regard African Americans with contempt.” “The young actor,” however, “lived among Blacks all his life, interacting with them on a daily basis” but they “were enslaved and lacking any human rights whatsoever.” “Booth’s preconceptions of Black inferiority were bolstered by their obligatory status,” according to Rhodehamel.

Abraham Lincoln inherited from his unambitious father “an enslavement to poverty and ignorance, to cold and hunger and backbreaking labor” but he fought all his life. “It is hardly possible to exaggerate the crudity of frontier life.” The Lincoln family belonged to a Separatist Baptist Church “that opposed slavery.”

“As much as Lincoln detested the immorality of slavery, he was no abolitionist.” “In the eyes of radical opponents of slavery, Lincoln in the mid-1853 was no more than a moderate who gave lip service to the cause.” “In the years between 1854 and the outbreak of the Civil War,” “Lincoln became a single issue politician [that of] . . . stopping the spread of slavery into the West.”

The loses and violence of the Civil War pushed Booth and Lincoln in opposite directions, resulting in the Emancipation Proclamation and Booth’s assassination of Lincoln and his own subsequent death. Questions about motives in this work would appear to some readers as too close to psychoanalysis.

The author makes factually questionable statements such as: “Jefferson Davis, the so-called president of the of the rebellion that had styled itself a nation” and appears to fail to obfuscate carefully about Lincoln’s support for sending African Americans to deadly colonies in Africa.

Rhodehamel elegantly tells the familiar story of the Lincoln assassination from the view of race with engaging prose and extensive scholarship. America’s Original Sin has annotation.