American Wine: The Ultimate Companion to the Wines and Wineries of the United States 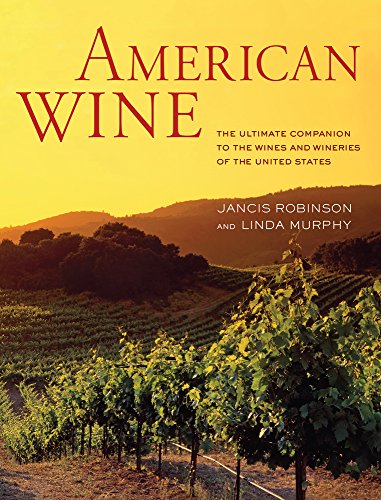 “We welcome the new level of detail and breadth of coverage . . .”

For decades, one of the indispensible books for wine lovers has been Hugh Johnson’s World Atlas of Wine. As the Atlas progressed from edition to edition, it grew in size as the world of wine expanded, but it always featured detailed maps of wine regions along with photos, graphs, and text providing a survey of wine and each wine region. For the fifth edition, published in 2001, Johnson was joined by the British wine writer Jancis Robinson, who took on a greater role in the sixth edition, published in 2007.

Now, Jancis Robinson is joined by the American wine writer Linda Murphy in presenting a book in the tradition of the World Atlas of Wine, but focusing solely on the wines of the United States. The 30 pages on U.S. wines in the World Atlas are expanded into 250 pages in American Wines.

That comparison is a bit misleading, as American Wines features larger fonts and wider line spacing, so that it could have as many as 800 words per page, while the World Atlas could pack as many as 1,300 words in a page. But in both cases, very few pages are solely text.

American Wines includes over 200 photographs and nearly 60 maps, along with many wine labels and other sidebars, thereby looking very familiar to fans of the World Atlas.

This is appropriate, given the tremendous changes in the U.S. wine industry in even the five short years between the World Atlas and American Wines. In 2011, the United States surpassed Italy and France to become the number one wine consuming country.

As Ms. Robinson points out in her preface, the number of licensed wine producers in the United States has grown from not much more than 2,000 producers at the turn of the millennium to more than 7,000 today.

Meanwhile, California shows a decline in acreage from 800,000 to 535,000, and other states also show significant declines, due to not counting acreage devoted to grapes for raisins, grape jelly and juice, and table grapes.

While the coverage of California wines has increased significantly from that in the World Atlas, the coverage of other wine-producing states has expanded tremendously. For example, the World Atlas has only this to say about Virginia wines: “But the eastern state that, after New York, offers the most excitement today is unquestionably Virginia, home to more than 100 small, intensely ambitious wineries, with Merlot and the Cabernets being particularly successful.”

American Wines, by contrast, dedicates eight full pages to Virginia wines, devoting as many as three paragraphs each to wineries such as Barboursville, Linden, and RdV. In World Atlas, no individual winery anywhere in the world merits more than a sentence or two.

Many of the 50 states in which wine is produced get much shorter shrift. Massachusetts, for example, gets only one, three-sentence paragraph. There is, in short, no attempt to be “balanced” or appeal to local interests, but instead American Wines focuses on the best regions of interest to anyone in the world.

The introduction, “American Winemaking Comes of Age,” briefly recounts the history of grape growing and wine making in America, but is particularly helpful in explaining the advances in matching grape varieties to site, improved clonal selection, and increased focus on sustainable agricultural practices, with their effects on improving the overall quality of American wine.

The introduction also discusses changes in winemaking practices, noting a number of techniques now available to the winemaker, although “for all this new technology, the most accomplished winemakers prefer to use as little of it as possible.”

It is clear that the changes in the American wine scene in just a few years will continue, as even more wineries are built, and grape growing and wine making practices continue to improve and propagate throughout the industry. American Wines is therefore merely a snapshot of the current state of the industry in the United States.

We welcome the new level of detail and breadth of coverage that American Wines provides, and we hope that, as with the World Atlas, new editions will appear every six years or so.