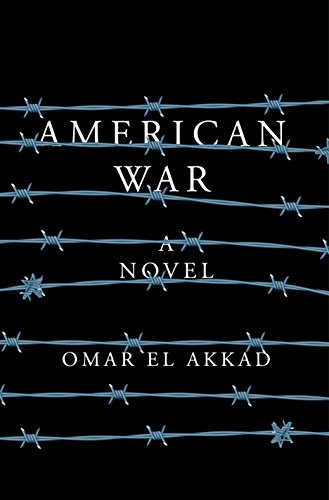 "I belong to what they call the Miraculous Generation: those born in the years between the start of the Second American Civil War in 2074 and its end in 2095."

American War is a dystopian tale set in the late 21st century, centered around Sarat Chestnut, a young girl born in Louisiana who is only six when the Second American Civil War breaks out. Earth's climate is broken, the world has rejected fossil fuels, but the Southeastern USA, known as the Free Southern State, has decided that fossil fuels are still their right and thus a war breaks out.

Here begins the major flaw of American War: the majority is set in the Southeastern USA, yet the author obviously has zero clue about that region or its many varied cultures. Stereotypes abound in this novel, ripped straight out of the great Southern literature that this novel aspires to be yet falls so short of. The entire premise that civil war would break out because the South refuses to give up dependence on fossil fuels shows a complete lack of research into the reality of the energy structure of the region. That incredible flaw makes it hard to suspend disbelief and buy into the rest of the narrative.

Ignoring the huge flaw in the main setting's portrayal, the novel is still a narrative mess. Part memoir? First person remembrance? History book with journalistic entries? There are many novels that have blended these elements seamlessly. This is not one of those novels. At every chapter break, journal entry, historical account, the author could be felt. The structure is contrived and diminishes the overall story.

Which is unfortunate, as the overall narrative could have been very interesting. A story of revenge and redemption in a post-climate change, dystopian landscape can be told in many ways that offer the reader something different. Yet just like with the stereotyping of the South, the author falls back on tried tropes. Refugee camps, fleeing to a "free" land, the wise mystery man. All done before in much richer, more believable ways by other authors.

To be fair, Akkad's prose is strong and he has a grasp of story, but in the end he falls short of how to present that story. Despite the strong prose, the influences of other novels and other authors that have tackled this subject, could be felt too easily, which makes it hard to commit fully to the characters and narrative presented. American War: A Novel is not a bad novel, and many readers may like it, but in the end its flaws overpower any of its strengths.