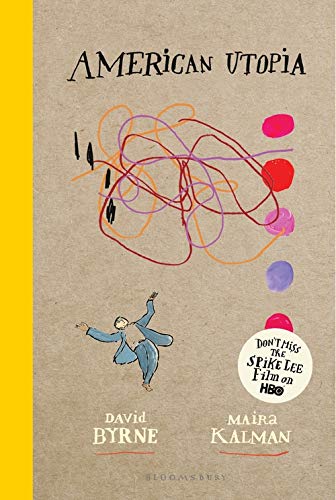 So this is the new “book” by the great singer-songwriter David Byrne, with illustrations by Maira Kalman. Whe word “book” appears in quotes because this is the modern equivalent of John Lennon’s In His Own Write from 1964. Here’s Lennon’s “Good Dog Nigel” in its entirety: “Arf Arf, he goes, a merry sight/Our little hairy friend/Arf Arf upon the lamppost bright/Arfing round the bend/Nice dog! Goo boy/Waggle tail and beg/Clever Nigel, jump for Joy. Because we’re putting you to sleep at three of the clock, Nigel.” Beware of rock stars with book contracts. Bob Dylan’s Tarantula will also trap the unwary.

A little context is necessary. American Utopia is a Broadway concert presentation filmed by Spike Lee that is, by all accounts, a delight. If it’s even half as stimulating as the 1984 Talking Heads concert film Stop Making Sense directed by Jonathan Demme, and you love suits and bare feet, you’ll be on board.

The book is a companion volume. But to be successful it still has to stand on its own, and in that it fails. You’re buying a lot of white space. The text consists of short excerpts from Byrne’s song lyrics, accompanied by Kalman’s brightly accented line drawings.

Taken as a whole, the message echoes Byrne’s website. Despite the annus horribilis we are experiencing, it’s not all bad. Green shoots are popping up. There’s a lot of wind power in Texas. Europe loves e-bikes. Staten Island is more nuanced than you think (Byrne wrote that piece himself, exploring the place by bike).

The website’s great, but the book’s structure reduces the good news to isolated platitudes. “Everything changes/everything stops/every day is a miracle.” That’s three pages right there. “Raise your eyes to the one who loves you/It is safe right where you are.”

“What are those people doing over there? Should I be doing that TOO? Are they like ME? Are they LOOKING at me? Should I go over and TALK to them? Is there a LOGIC to this? Is it supposed to make SENSE.” No, it stopped making sense a long time ago.

The headings to the chapters, if that’s what they are, are made up of improbable but real American towns: Paw Paw, Michigan; Frogville, Oklahoma; Lazy Mountain, Arkansas; Thunderbolt, Georgia. Anyone who watched the Byrne-directed film True Stories (1986) will be familiar with this level of whimsy.

That’s it, the book is whimsical. If it’s on a friend’s coffee table, you’ll have an amusing two minutes with it. But they’re asking $24 for the hardcover. The money might be better spent on Byrne’s How Music Works, which offers plenty of insights.

Is it impertinent to ask why Byrne did not provide his own illustrations, as Lennon did? He attended art school—that’s where Talking Heads met. His style is whimsical, and it would be perfect for the book. Kalman’s stuff is fine, though, about what you’d expect to find in a mid-level children’s book. Which, come to think of it, maybe this is.

At the end of the book there’s a big red “YES.” Affirmation time. The aforementioned Lennon climbed a ladder at a Yoko Ono exhibition, found the same “YES,” and decided they were meant to be together.

So we laud David Byrne’s many projects. His music continues to sustain. Remain in Light is a towering achievement. American Utopia, the movie, is probably good, too. But my guess is that only Byrne completists need to buy the book.