AMERICAN TEMPEST: HOW THE BOSTON TEA PARTY SPARKED A REVOLUTION] 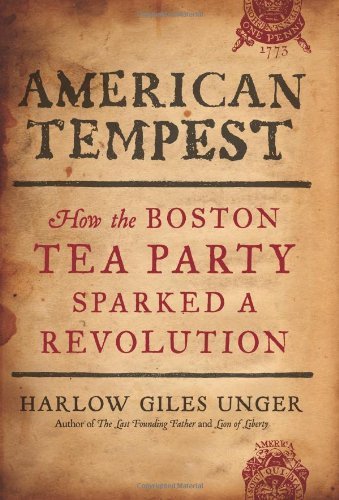 The more I read and learn about early American history, the more resonant these two words become in relation to my own deficient education.

In no way are those two words a testimonial to or suggestive of Harlow Giles Unger’s American Tempest: How the Boston Tea Party Sparked a Revolution.

The publicist’s letter accompanying the review copy ended its first paragraph with this sentence: “The Boston Tea Party and its patriots had started a political and social revolution that would eventually lead to the formation of a free nation.” My sensibilities were marginally offended before I had read a single page. I’m far more convinced that Thomas Paine’s pamphlet Common Sense did more to stoke colonial passions than the Boston Tea Party itself. I still believe that, but American Tempest has helped me take off my jingoistic rose-colored glasses and begin to truly see our history as it happened—not how it was feebly taught to me in school.

If you are looking for a few pages, perhaps a chapter, to flesh out the events of December 16, 1773, to add a little more color to the mentioned-in-passing the event was given in most school classes, then this book isn’t for you . . . because it is so much more comprehensive in its scope.

The events that birthed the original Tea Party are given their just airing via Ungers’ scholarship. It is so much more intriguing to follow the timeline leading up to the revolution when you are given a look behind the curtain, to see the Great Oz for who (or what) it really was. I grew up with the understanding that the tea party was comprised of a group of colonists dressed up as native Americans who boarded British ships in Boston harbor and dumped their tea cargo into the bay, all because they were upset about being taxed without representation. That did happen, but the stories surrounding that singular event are far more colorful and absorbing.

What you see when you witness a play is only what you are meant to see. Behind the set is a whole other world working sometimes in unison, sometimes not, to make the presentation effective; and so it was with colonial Boston.

Beginning with her geography she was proven to be the most prosperous, indeed affluent, town in the new country. Any man who had head or passion for pursuing profitable enterprise could do no better than to set up shop in Boston at that time. Small businessmen grew to merchants, and as trade with Britain became more abundant so too did the need for banks, which the merchants did as well, leading to an explosion in power, prestige, and political intrigue for the elite merchant-bankers.

A move to stabilize British currency sank the fortunes of Samuel Adams, Sr., causing acrimonious embitterment between his family and Parliament. This incident is never taught in school, and yet it quite possibly gave rise and purpose to the next generation of Adams’s: Samuel Adams, Jr.

This “split—and the bitterness it engendered—reached down into the next generation when Harvard demoted (Sam Adams Jr.) from the fifth highest rank in his class to the bottom. . . . His father’s plight forced the young man to find work to help pay costs of attending college and sparked what became a lifelong loathing of . . . other merchant-aristocrats and a deep hatred for British authority. According to Chief Justice Peter Oliver, Sam Adams was ready to commit any “crime” to overthrow the government. “When asked to draw the picture of the devil,” Oliver recounted, “a celebrated painter responded he would ask Sam Adams to sit for him.”

We are taught that our outrage over the taxation of British tea was justified, even to the point of declaring the tax itself exorbitant; in fact, it was pitifully small. Sure, there were a number of other taxes and Acts that Parliament imposed, but we are told the Tea Tax was essentially the final straw. Mr. Unger, in page-turning detail, reveals many reasons why such “tumult” was spawned in Boston and eventually spread throughout the colonies.

Perhaps most stunning of all is the book’s denouement, the unsettling, if not undeniably true fact that things really didn’t change much once we achieved independence. The major difference was realized in our own self-government, of not being beholden to a monarch; we had our own political aristocracy at the time, but unlike Parliament there was a greater connection with America’s people, more so than that of Britain’s legislative body. We were not taxed less, but in fact taxed far more than the British ever attempted.

One very thoughtful inclusion awaits the reader at the conclusion of the book: A nice image of the Declaration of Independence and its text, including the names of all signatories. Appendix B contains a catalogue of reported Boston Tea Party participants as initially printed by Benjamin Edes, the founding publisher of The Boston Gazette; Unger includes a mention of each participant’s occupation—an interesting addition because it more clearly allows us to see what the demographic of such a historical event was like.

American Tempest is a must-read for anyone who remembers what they learned in high-school history class. At once fascinating and engrossing, it fills in huge gaps between major events and gives studied, fundamental reasons for the actions that occurred.

Incredibly well written and as readable as a solid novel, the author has done a prodigious service to consequential events in our early history, and opened a provocative window unto the truths that I’ve never been told.