The American Slave Coast: A History of the Slave-Breeding Industry 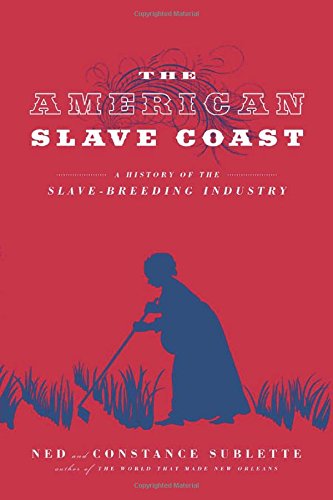 The last couple of decades have seen a steady stream of fully documented, honest, readable, and scholarly single works on American slavery. They cut through the excuses, political correctness, sensationalism, and myths. Much of this scholarship comes from writers with less than the usual scholarly credentials of professional historians.

As the subtitle suggests Sublette and Sublette in The American Slave Coast do cover the controversial subject of the slave breeding industry of the United States. This book would make an important contribution even if were confined to that subject, although in a much smaller volume.

The authors of The American Slave Coast could have written more on that matter, at the least about Thomas Jefferson’s opinions. It is grim enough, even “some oral histories recall eugenic practices by slave owners.”

They authors add that, “from African slave raids forward, marketing people was a process of selection for desirable traits as well as a survival of the fittest.” Women could be bred like livestock for specific genetic traits in their babies.

Some owners did seek or allow for a degree of cooperation of the women. The lash and the threat of sale to the deadly sugar plantations in Louisiana did serve as a more common means of enforcing rape, including with the owners, than such incentives such as freedom after making so many babies for eventual profitable sale to the sugar fields in the south.

What the Sublettes have created is more accurately described as an overall outline of the whole history of this “peculiar industry” in what became the United States to the end of the American Civil War. Even at more than 700 pages, this work does not cover everything, but it achieves much by keeping distraction to a minimum and having structured clarity throughout.

One of the many positives of the style of this book is how no question ever really goes unanswered and never something obvious. Rhode Island, for example, becomes a great center for the slave trade because its captains smuggled molasses from the Caribbean, a product used to make the rum that most often saw trade for slaves in Africa.

This book contains less traditional but more accurate explanations for a thousand other points. Other writers, cited in the notes, provide more detail for the interested reader who wishes to go further. Except for its size, this work could make a useful textbook or reference work for an introductory class on its subject.

Even to the serious scholar of the subject, The American Slave Coast can open new ideas on unfamiliar ground in the general subject of human bondage. It outlines, for example, the underappreciated history of the sale of the original native peoples of North America and how slavery was always multi-national.

The authors never lose sight of the basic economics and of the motives of the slave owners. Somehow, this narrative avoids stereotypes despite its necessary brevity.

How American slavery gradually became a self-supplying market has an involved history. One of the important threads in this narrative is describing American slavery as an “economic system in which people are money” beyond only serving as investments and merchandise. The continuous lack of means of exchange beyond the trade in commodities in the New World made human beings of African descent bankable, with their offspring as interest.

Benjamin Franklin beat Marx by more than a century in seeing labor as a currency. Even owners with few slaves could make needed money by renting out the enslaved or using them as collateral on a loan.

The authors also see slaves as another dimension as currency. They write that  “slave traders dealt in cash, which could mean specie (silver or gold coins) but typically meant high-quality paper that could be readily exchanged for specie.” The flow of money needed in the slave trade provided all too rare currency that bound the South to the West and even beyond.

Racism is a major part this story of Barbados, Brazil, profit, tobacco, etc. Geography and chronology also had roles, as the authors give in one example, “it took Virginia between sixty and one hundred years to become a slave society, but South Carolina began as one.”

Virginia evolved into a land of breeding farms that replenished the laborers lost in the deadly rice fields of South Carolina and the equally murderous labor system of the sugar fields of Jamaica. In the latter, slaves were worked and starved to death as it proved more profitable to replenish the labor supply each year with more slaves than to pay to feed them out of season.

Each area, even Maryland, had a peculiar history of slavery but none stranger than Georgia whose principal founder James Oglethorpe regarded slavery as immoral (although he personally invested in the African slave trade) and against the principles of the colony’s creation to give (white Protestants) a chance at new lives in a New World.

The scholarship is also remarkably current as when the authors cite the recent movie Twelve Years a Slave as an example of the more than 100 published slave narratives that largely went ignored until the 1960s, and actually, continue to often get ignored even to the present.

The American Slave Coast has much such commentary on sources. It gives, for example, a concise summary of the problems with the Works Project Administration’s famous slave narratives. Even the Sublettes, however, missed the important narratives of David George and Olaudah Equiano while bemoaning the lack of such colonial slave memoirs.