AN American Radical: A Political Prisoner in My Own Country 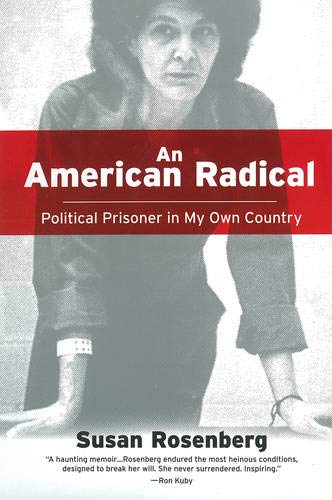 You need only two ingredients to create a worthwhile memoir: an intriguing life story and the writing skills to convey that story evocatively. Susan Rosenberg fills both of those requirements in An American Radical. She definitely has led an event-filled life; and in her first book, she writes capably and effectively.

How intriguing a life? In 1982, Rosenberg, who describes herself as “an ardent supporter of revolution,” found herself on the FBI’s most-wanted list due to her alleged involvement in the 1981 robbery of a Brink’s armored truck in Rockland County, New York—a violent affair that resulted in the deaths of a guard and two police officers. Following the robbery, Rosenberg, along with a group of fellow radicals, was indicted by the FBI.
Rosenberg then went underground rather than face the legal system.

The FBI arrested Rosenberg and a fellow revolutionary, Timothy Blunk, two years later in New Jersey as they were unloading a rental truck filled with guns and explosives. The two were tried and convicted for that offense. She was sentenced to 58 years in federal prison. Rosenberg spent 16 years behind bars in six federal institutions until she was pardoned by President Bill Clinton in one of the last acts of his presidency in January 2001.

Rosenberg writes cleanly and clearly of her radical life and times, albeit leaning a bit too heavily on reconstructed dialogue. She writes especially evocatively about the hellish conditions she faced while incarcerated—which she calls “a terrible, relentless, sixteen-year existential nightmare.”

The book contains plenty of details about Rosenberg’s radical life before prison, her trying times behind bars and her life in the last ten years working as a human-rights and prison-rights advocate. What Rosenberg doesn’t tell us about in detail is exactly what role (if any) she played in the Brink’s robbery and what exactly she and Blunk were planning to do with that twenty-foot U-Haul truckload of guns and dynamite.

Rosenberg and her fellow radical activists, she says, favored “armed actions against government property (including bombing unoccupied government buildings)” to “show that despite the power of the state, it was possible to oppose it.” [Later, she explains that she and Blunk had “no immediate, specific plan to use the explosives. We were moving them into storage for an unspecified time and purpose. We were stockpiling arms for the distant revolution that we all had convinced ourselves would come soon.”

As for the Brink’s robbery, Rosenberg is vague. The investigation, she said, “led to several prosecutions, grand juries, indictments, trials, and convictions. Many people who were both remotely and closely connected to the events were targeted and I was one of them.” She fled, Rosenberg said, because she “presumed” the trial would be “rigged.” So she decided to “follow my revolutionary heart and risk all.”

Her subsequent trial seems not to have been “rigged.” It was a combative one, though, in which Rosenberg and Blunk used a “necessity defense,” claiming, as she puts it, that “the government was guilty of war crimes against people in the developing world and at home,” and that she and Blunk were “part of an organized illegal resistance movement and that we were acting out of conscience.”

The defendants sacked their lawyers and represented themselves. The conservative judge trying them disdained the necessity defense, called the defendants terrorists, and threw the book at them. President Clinton’s pardon on his last day in office ten years ago was greeted with shock and dismay by a panoply of New York politicians and law enforcement officials, including then New York City Mayor Rudolph W. Giuliani, U.S. Sen. Charles E. Schumer, and then New York City Police Commissioner Bernard B. Kerik, who said the pardon “sickened” him.

Giuliani said then that Rosenberg “was convicted of having in her possession 740 pounds of explosives, a submachine gun, weapons. She admitted she had these weapons to give to someone to use in a bombing, and she had been involved in a significant number of robberies, bank robberies.”

That last statement has not been proven. Nor does Rosenberg address it directly in her book.