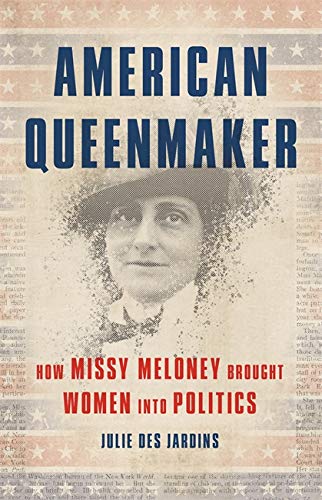 “Des Jardins’ writing inspires all of us in the way Missy clearly inspired others. It’s an incredible feat for a biography to serve its subject so well.”

Julie Des Jardins brings impressive research skills in her biography of Missy Meloney, the most important feminist nobody has heard of. Meloney’s life was rich and varied, supporting women writers, journalists, politicians, and scientists. She worked to make American homes easier on housewives and encouraged important historical monuments (Mount Rushmore and the Tomb of the Unknown Soldier). Her reach was so broad that a coherent narrative is impossible. Instead Des Jardins follows chronology to offer a project by project life, while showing Meloney’s considerable influence on several presidents.

The result is the portrait of a woman who was “a journalist, publicist, social reformer, mother, rainmaker, diplomat, political operative, and patron of women.” Besides her wide areas of interest, des Jardins makes clear that much of Meloney’s important work was in enabling others to follow their passions. She was a “liaison, a connector, a facilitator, a human cultural antenna, or a matchmaker of sorts.” It is this role that de Jardins emphasizes the most, from Meloney’s early start as a local journalist to her last days as close friend of Eleanor Roosevelt. In between, this one small sickly woman packs more into her life than any ordinary human being. Reading this biography is like reading the lives of several people.

Des Jardins rightly stresses Meloney’s role as facilitator and cheerleader, showing how important this kind of support can be for scientists, writers, and politicians. Meloney’s life serves as a kind of blueprint for how women can help each other: by valuing the work other women do, by insisting on fair wages for that work, by recognizing the role women can play in politics (which she did at a time when women couldn’t vote or run for office).

Meloney knew all the right people, from Theodore Roosevelt to ambassadors to royals to Nobel Prize winners, all of whom gave her journalistic scoops when she needed them most. Her willingness to listen above all gained her the trust of those she met. It was these connections she used—for others more than for herself—to further important work.

Although she had come up in journalism at time when female mentors were rare, she was generous with her own experiences, helping to guide others, opening doors for the women who came after her, rather than slamming them shut. “By giving women editorial advice, publicity, and compensation that legitimized them to publishers and broader readerships, she helped to propagate their universal stories and propelled a few of them on to literary fame.” In other words, “Missy gave women their breaks and paid them like men.” This parity is something still being fought for, something Missy was doing as an editor early in the 20th century. If only more editors—and employers in general—had followed her lead!

Des Jardins quotes well from Meloney’s own writing as well as those of her friends and colleagues. A beautiful description by Eleanor Roosevelt says, “One never came away depressed from seeing ‘Missy’ Meloney. One always felt that the world was so full of interesting things that there as something important for everyone to do and she was urging you on to do your share.” This sums up well the gist of the biography, of Missy’s role among her colleagues and friends. Des Jardins’ writing inspires all of us in the way Missy clearly inspired others. It’s an incredible feat for a biography to serve its subject so well.