American Prophets: The Religious Roots of Progressive Politics and the Ongoing Fight for the Soul of the Country 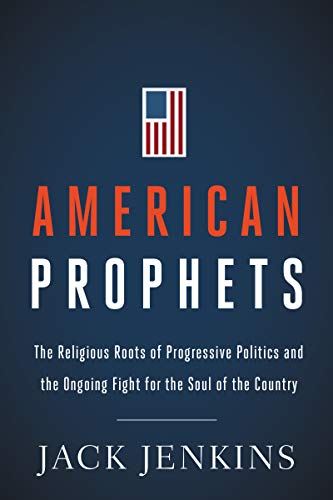 “Pope Francis is dope,” says Jack Jenkins quoting Chase Iron Eyes, an American Indian activist, attorney, politician, and member of the Oglala Sioux Tribe in American Prophets: The Religious Roots of Progressive Politics and the Ongoing Fight for the Soul of the Country. The quote is emblematic of the general theme of Jenkin’s book: that arising in our nation is a powerful alliance among adherents of various faiths united in the drive to move our nation in a progressive direction.

Author Jack Jenkins merits some introduction. He is a national reporter for Religion News Service, a former senior religion reporter for ThinkProgress and holds a Master of Divinity degree from Harvard University.

Jenkins builds his case by describing initiatives launched individually by various faith leaders each from within his or her own bailiwick, and each of which went on to bring about momentous society-wide changes. A stunning example appears early in the book with Sister Carol Keehan, a nurse with a master’s degree in healthcare finance who headed the Catholic Health Association of the United States (CHA,) which comprises about 600 hospitals and 1600 long-term care and other health facilities.

The first time Sister Carol heard Barack Obama speak as a presidential candidate, she was deeply disappointed in the shallow grasp he seemed to display regarding our nation’s healthcare needs. About ten pages describe the herculean efforts she personally exerted to first convince Obama of the need for healthcare reform and then to help him dismantle the numerous inevitable roadblocks once he was elected.

Three important messages emerge from a reading of American Prophets. First, a new consciousness is arising and making inroads toward social progress. “And if you listen closely to a growing cadre of Religious Left leaders, Indigenous activists, and even Pope Francis himself, it’s not hard to hear a growing chorus of support for a form of economic populism rooted in faith.”

Environmentalism is a concern in many religions, not just the Christian left. Earth Spirit honoring Native Americans, eco-conscious Jews, Muslim climate activists, and “Buddhists, Sikhs and others all draw on similar themes, albeit with different terms.”

Second, movements arising out of what Jenkins calls the religious left tend to develop through the efforts of separate individuals from all different camps, and broadly represent an emerging new consciousness slowly insinuating itself into the general populace. In contrast the Christian right is a behemoth organized centrally by a privileged few. As such the religious right is better understood as more of a backlash phenomenon attempting to reverse a general progressive shift happening very gradually but surely in our culture.

Third, while the religious right may largely be seen as referencing a fear-based and nearly “toxic version of their faith” in attempt to hold back inevitable societal shifts, perhaps for reasons that are less than commendable and maybe even morally bankrupt, the newly emerging religious left is inspired by genuine caring about the least of these our brothers and sisters in humanity. Racial equality, immigration reform, eco-consciousness, an equitable healthcare system, LBGTQ+ rights, etc. are all values the religious left shares in common with secular progressives. These two latter groups stand to gain political power and strength by acknowledging each other and working together to meet the goals they hold in common.

American Prophets offers a fresh viewpoint that would not likely be noticed without the careful attention and study Jenkins put into his research, and it offers hope to those who may be experiencing dismay at the current political scene in this country.

Though the 55 pages of notes seem more than adequate, for anyone hoping to access this information for any purpose beyond casual reading, an index would have been greatly appreciated.