American Predator: The Hunt for the Most Meticulous Serial Killer of the 21st Century 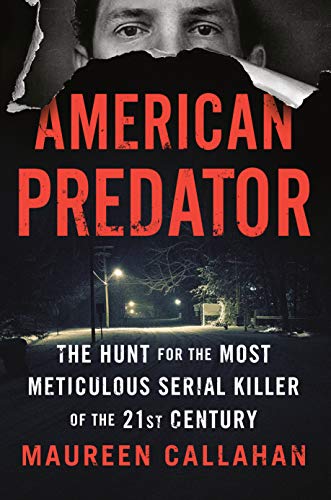 “A gripping and chilling look into how a serial killer operates in plain view and exactly what it takes to capture him, American Predator is a must-read for any true crime enthusiast.”

A gripping and chilling look into how a serial killer operates in plain view and exactly what it takes to capture him, American Predator is a must-read for any true crime enthusiast.

Maureen Callahan draws upon her extensive journalism background to provide an objective and insightful profile of not only her subject, confessed serial killer Israel Keyes, but also of the law enforcement professionals investigating his crimes. Her lack of sentiment is refreshing as she never elevates Keyes to the level of pop-culture idol, but instead reveals his true nature: a heartless “ambush predator” who will “kill with lightning speed and vanish just as fast.”

Instead of glorifying Keyes’ sociopathy, Callahan strips it bare. Keyes himself doesn’t deny his heartlessness. Instead he relishes the fact that unlike most people, he can be honest with himself—and eventually the men and women who capture him—about who he is and what he wants from life. This is a man who doesn’t care about society’s trappings or what others label as success. He knows what he wants, what he enjoys, what fills his life with meaning, and he does exactly that: He hunts, and he kills.

When not actually in the act of kidnapping, sexual assault, torture, killing, and disposing of bodies, Keyes would spend his free time preparing for his next hunt. He read textbooks written by former FBI profilers and forensic specialists, he cached weapons and tools across the USA, he studied maps to pinpoint the safest routes to his next target area, and he fantasized about exactly what he’d do once he got there.

The only thing he didn’t do beforehand was choose a victim, that he left to the whims of fate, killing indiscriminately. Age, race, and sex didn’t matter to him. He’d take one person or two, depending on who wandered into his kill zone—two was better, a bigger challenge, more to feed his ego; but one suited just fine because it meant he would have more time to focus on them.

In short, his killing ground was the entire country (circumstantial evidence also points to possible kills in Canada and Mexico), and his victims were anyone and everyone who crossed his path. As the subtitle suggests, he was meticulous, and although he confessed to 11 homicides before his suicide, he was probably responsible for many, many more going back decades to when he was a teenager.

More fascinating and enlightening than the killer at the heart of American Predator are the law enforcement officials who track and eventually catch Keyes. A single missing person’s case in Alaska eventually led to Keyes’ arrest: Samantha Koenig, an 18 year old abducted from the coffee kiosk where she worked. Keyes hunted too close to home, and it cost him everything.

Callahan portrays the majority of men and women involved in Keyes’ Alaskan case as hardworking, dedicated professionals who band together despite coming from different jurisdictions and agencies to bring Samantha Koenig home. Alaska “is home to rugged individualists who nonetheless know there will come a time, amid the cold, unpitying winters, when they will need help.”

Despite some initial investigatory missteps, the FBI and local investigators are unrelenting, tracking every lead until the case leads them to rural Texas and Israel Keyes. Even more interesting than their bull-dogged investigation are the differing approaches to Keyes’ interrogations.

Using actual transcripts of these conversations, Callahan gives the reader a front-row seat to not just the psychology of a serial killer and master manipulator, but also the thought process of the law enforcement professionals interviewing him who are working equally hard to force him to tell them more than he thinks he is.

A stray word, wrong tone, mistimed question, awkward body language—any of these can lead to defeat in this intricate and intimate cat and mouse game with life and death stakes.

In the end, a kind of justice prevails, at least for Samantha Koenig’s family, although Keyes’ suicide creates more questions than his confessions solved. American Predator succeeds in unmasking the unglamorous truth that drives sociopaths like Keyes: They inhabit their world alone, every other human on the planet exists merely as prey. However, Callahan makes it clear that the men and women striving for justice for victims are equally as relentless in their own pursuit of these killers, giving all of us “prey” a reason to hope.