American Grotesque: The Life and Art of William Mortensen 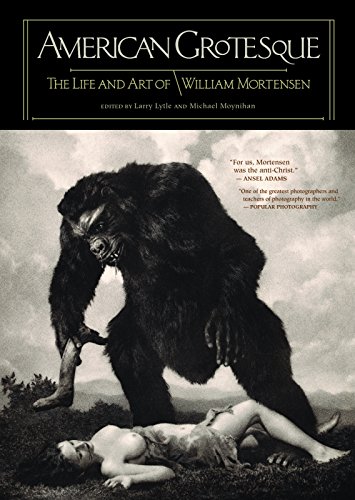 “Mortensen’s imagery is rich with fantastical and grotesque elements reminiscent of Brueghel, Hieronymous Bosch, or Goya.”

In this expertly written and fascinating biography, Lytle and Moynihan examine the battle of ideas in photography at the beginning of 20th century.

William Mortensen created his photographic work steeped in Hollywood technique and dramatic lighting at a time when the new movement in photography—best represented by the work of Ansel Adams and Edward Weston—demanded a purist, realistic view of the world.

Mortensen fused 19th century pictorialism with casting, staging, lighting, and matte paintings to produce his compelling images which were startling and disturbing. Adams, Weston, and the f/64 Group were striving for a kind of photography unencumbered by the romantic conventions of 19th century pictorialism. Their goal was to enlighten the public into thinking of photography as a fine art of equal importance as painting or sculpture.

To Mortensen photography was a creative art form rather than a “realism” mirror on the world. His photographs were so imaginative and manipulated that the result often looked like lithographs or drawings. His prints were exhibited in salons, seen by thousands, and imitated.

But his eccentric approach to create compelling imagery was seen as an assault on “straight photography” by people like Adams, Weston, Beaumont and Nancy Newhall, and others. They objected to the look of his imagery, and to an even greater degree the subject matter, which was rich and grotesque with fantastical elements reminiscent of Brueghel, Hieronymous Bosch, Goya, and Edgar Allan Poe.

“To us,” Adams wrote about Mortensen, “he was the AntiChrist.” Their condemnation was so intense that they effectively sought to “obscure his importance by colluding to write him out of photography’s history.”

Mortensen was a talented artist as his early etchings and sketches attest, and a brilliant technician who heavily crafted his images to fit his vision in a way that was second nature to him. This was an influence that was carried over from his work in Hollywood during the silent film era.

He worked on Hollywood films for over ten years, including the 1923 production of Cecil B. DeMille’s The Ten Commandments, and later as a still photographer in DeMille’s 1927 epic depiction of the Christ story, The King of Kings. Mortensen’s work has the mark of the overly dramatic and flamboyant, a typical affect of silent films and one that gained the admiration of DeMille. DeMille was so taken with Mortensen’s work that he had 50 copies of a private folio of The King of Kings produced; each contained 60 prints.

Mortensen photographed many Hollywood stars and was a prosperous businessman who founded his own Mortensen School of Photography in the 1930s, and even sold his photo kits through the pages of magazines; however, it is his writings in five published volumes where he revealed his philosophy and taught his methodology,

“Everything exists through its opposite. For pictures of calm and tranquil beauty to have any meaning, even for “sweet” pictures to have any meaning, it is necessary that the grotesque and the distorted exist. Perfection of form is significant only because the mal-forms exist also. Those who turn away from the grotesque are losing the richness and completeness of artistic experience.” (Mortensen, from Monsters & Madonnas.)

While Mortensen’s images bordered on the perverse or fiendish, he often returned to the female nude as a literal picture of perfection. It is a staple in his repertoire. During the 1950s as his popularity declined and there was less interest in his grotesques, he created more nudes that are mildly suggestive in a pinup style that was popular at the time.

The one-inch thick volume is a handsomely printed and beautifully produced book that contains over 100 excellent examples of his work, including a brilliant essay by him, photographs from his series on Character Studies, Nudes, The Occult, etc., and an insightful article by A. D. Coleman titled, “Conspicuous By His Absence: Concerning the Mysterious Disappearance of William Mortensen.” This piece deals with the aesthetic controversy between Mortensen and his fine art contemporaries’ efforts to diminish the importance of his photography.

The practitioners of fine art photography have had a long struggle in having their work recognized as a bonafide art form even as late as the 1980s, so it is easy to understand the early conflict. The question is, Does it give anyone the right to exclude a photographer from their place in fine art history?

A fitting irony to this story is that when William Mortensen died in 1965 his estate donated all of his photographic work to Tucson’s famous Center for Creative Photography, an institution that Ansel Adams was very instrumental in founding, and where his work also resides. Adams passed away in 1983.