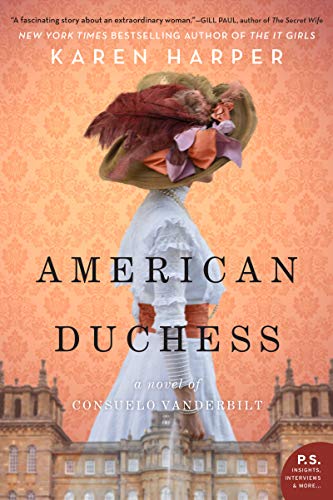 “In American Duchess the reader is afforded a remarkable and realistic portrait of a life well-lived in spite of and often in opposition to societal expectations. Harper presents a nuanced and well-researched tale of aristocracy and wealth and its effects upon those born into them.”

Consuelo Vanderbilt seems to have it all: wealth and prestige, beauty and youth. And yet, the one thing she is lacking is volition. Under the stern hand of her mother, she has lived her life in the shadow of Alva Smith Vanderbilt’s ambitions—ambitions as stern as the iron rod that Consuelo wears upon her back to improve her posture.

When Consuelo comes of age, her mother takes her to Europe for her “coming out.” Little known to Consuelo, this is her mother’s first opportunity to shop her out to potential mates. And Alva Vanderbilt finds the perfect candidate in the Ninth Duke of Marlborough, Sunny. Sunny, the poorly named owner of the only privately held castle in England, is strapped for cash, but has just the right title and prestige that Alva is looking for.

Consuelo, smitten with another man, is horrified at her mother’s maneuvers and tries to rebel. A well-timed heart attack on her mother’s part, coupled with the weight of the Vanderbilt fortune, couples to make Consuelo acquiesce to her mother’s request. And so, on one November morning, Consuelo Vanderbilt makes a loveless marriage to the Duke of Marlborough and becomes the American Duchess.

Like her mother before her, Consuelo is socially adept. She brings the duke back into the good graces of the Prince of Wales and produces the required “heir and spare.” But it is in helping the poor of their parish that Consuelo finds fulfillment and satisfaction and where she earns the nickname “the angel of Woodstock.” Oddly enough, these activities draw Sunny’s ire and become the first of many conflicts between them.

As marital tensions increase and Sunny spends more time away from home (and with his new lover), Consuelo revisits an old friendship with Jacques Balsan, a French balloonist. When World War I erupts, Jacques enlists, and Consuelo realizes her deep love for him in her constant worry.

With the end of the war, the world has changed, and Consuelo decides it is now time for divorce. She has witnessed her mother’s divorce from her father, William Vanderbilt, and has learned a thing or two. Knowing that Sunny wants King George to attend their son’s wedding and knowing she has the social skills and ability to make this happen, Consuelo embarks on a Machiavellian campaign to obtain her divorce and the duke, facing, not only financial pressures, but emotional pressures from his long-time lover, Gladys, agrees to take the tedious steps required by law.

At last Consuelo and Jacques are free to be together, but no life is free from complication. They move to France, and while Jacques’ friends have accepted and come to love Consuelo, his strictly Catholic family has not. An annulment is procured, at great cost to Alva Vanderbilt, who must admit she coerced her daughter into marriage and now finds her reputation in tatters. This annulment paves the way for a Catholic marriage and reconciliation between Jacques and his family.

But life is seldom easy. The peace after World War I is not an easy one and soon World War II erupts. Learning that Consuelo is on a hostage list of wealthy people the Germans want to kidnap for ransom, and with the Germans progressing quickly through Belgium, Jacques and Consuelo are forced to flee France and join the teeming masses of refugees. And finally, the American Duchess returns home.

In American Duchess, Karen Harper brings to life, in a very complex and real way, Consuelo Vanderbilt Balsan. She presents her as a rounded character, with faults but also strengths. Consuelo goes from awkward, bashful young girl to accomplished, compassionate woman in a convincing, realistic manner.

Harper also represents the peripheral characters well. The Duke of Marlborough, despite his shortcomings, is well-represented as a man with the weight of a heavy legacy upon him. Their sons Bert and Ivor are both painted as two men with two very different destinies and the effect that has upon them. Even Alva Smith Vanderbilt is shown to be more than a caricature of the evil mother. She is presented as having faults but not being malicious.

In American Duchess the reader is afforded a remarkable and realistic portrait of a life well-lived in spite of and often in opposition to societal expectations. Harper presents a nuanced and well-researched tale of aristocracy and wealth and its effects upon those born into them. Consuelo, a voice lost to history, is brought back to life in a vivid tale of both the advantage and weight of fame and notoriety.