American Cartel: Inside the Battle to Bring Down the Opioid Industry 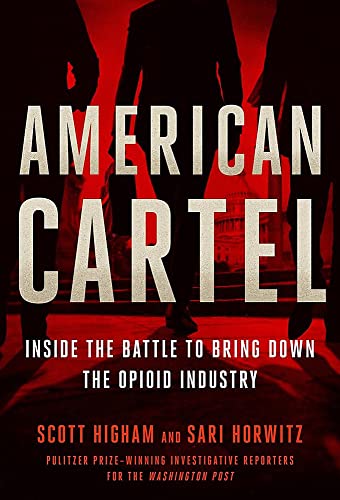 “American Cartel joins a small shelf of important books, including Dopesick and Empire of Pain, that fully capture the greed and corruption fueling the nation’s drug nightmare.”

Drawing on their own deep reporting, Higham and Horwitz tell the inside story of how the DEA—the federal agency responsible for policing the pharmaceutic industry—was constantly thwarted in efforts to regulate distribution of opioids.

There are only three major distributors of drugs to America’s 66,000 pharmacies, explain the authors. Under federal law, they are required to police their customers so that prescription pain pills do not reach the black market. They must also notify the DEA about their findings. But that did not happen.

Instead, the San Francisco-based McKesson Corporation, the country’s biggest drug distribution company, and others, shipped massive amounts of addictive pills to pharmacies that then sold the drugs with abandon, including over the internet, to anyone.

Relying heavily on interviews with whistleblower Joseph T. Rannazzisi, a retired DEA veteran of 29 years who led the agency’s unit responsible for policing the pharmaceutical industry, the authors detail the results of these actions (and inactions) of these company executives “drug dealers dressed in suits,” the outspoken DEA agent Rannazzisi called them.

In 2021 courtroom testimony, an irate Rannazzisi explained how he “tried to reign in renegade companies. Stop their mind-boggling pill shipments,” which sometimes numbered millions of opiate pills sent to small-town drugstores. He said the industry ignored his warnings and accepted fines from the Justice Department as a cost of doing business.

The companies displayed “indifference to the heartbreaking suffering on American streets,” he said.

By then, the former DEA agent was collaborating with a group of lawyers, most notably West Virginia small-town attorney Paul T. Farrell, Jr., in efforts to hold the non-compliant companies responsible. Their efforts included lawsuits across the country.

Much of American Cartel’s appeal derives from the authors’ intimate portrait of Joe Rannazzisi, a blunt-spoken New Yorker with degrees in pharmacy and the law who was outraged by the drug companies’ failure to question suspicious orders of opioids. In his dedication, he had worked 12- to 14-hour days, “fueled by a constant adrenaline rush,” write the authors.

Even in retirement, he kept rereading cases. When his daughter Rachel asked why he kept doing that—“You’re not with the DEA anymore”—he replied, “These cases were my life.”

In short, bright chapters, the authors recount the tremendous odds Rannazzisi faced in trying to stop the flow of opiates. The “Big Three” distributors—McKesson, Cardinal, and AmerisourceBergen—had the powerful backing of the Healthcare Distribution Alliance, a trade association that “made sure Congress and regulators did not mess with the profitable nexus between the drug makers and the pharmacies.”

The Alliance is based four miles from DEA headquarters in northern Virginia. “Big Three” executives form its executive council.

At the same time, distributors and drug makers were benefiting from a constant stream of top DEA officers who left for better-paying drug industry jobs with high six-figure salaries. The outflow included a former DEA attorney who had worked on the crackdown on the opioid industry and went on to help create legislation favorable to the industry.

While lobbyists created legislation that weakened the DEA’s enforcement abilities—passed with little opposition in Congress—lawmakers were pressuring DEA administrators to “fall in line” or face cuts in agency funding. “Key members of Congress were caving to the drug industry, which helped to finance their campaigns,” write the authors.

As this transpired behind the scenes, Walgreen’s stores in one Florida town sold drugs in “open-air drug bazaars” held in pharmacy parking lots. Managers called the police about “unruly” crowds but refused to stop filling prescriptions.

Elsewhere a CVS pharmacist reported she could fill oxycodone prescriptions “all day long” but set limits so she could supply her “real pain patients.”

This is a mind-boggling story, in which American companies in the business of supplying needed pain medications acted like the cartels smuggling illegal drugs into the United States.

Said one former DEA agent: “The American people will never know what these companies did to our country.”

American Cartel joins a small shelf of important books, including Dopesick and Empire of Pain, that fully capture the greed and corruption fueling the nation’s drug nightmare.