American Baby: A Mother, a Child, and the Shadow History of Adoption 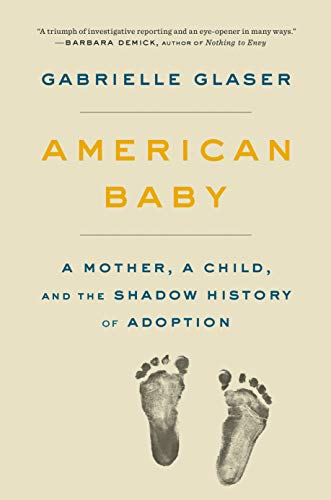 “American Baby provides a meaningful discussion on where we have been on and how we need to change the adoption system.”

This story begins in 2007 as a negative version of Jewish Geography, “the game in which Jews who meet each other for the first time try to identify people they have in common.” David Rosenberg, the center of the story, received a kidney from a friend “as David had been adopted as an infant and had no known relatives.”

Rosenberg’s health declined and for personal, not medical reasons, he tried to find his biological parents. This husband and father “wasn’t looking for new parents.” The couple who adopted him “loved him deeply—and he them—and gave him every advantage.”

“Like millions of other adopted people,” Rosenberg discovered that “the promise of finding birth parents was largely an illusion.” Adoptees and their parents are the victims of “political, scientific, cultural, and economic forces that caused and then enforced their separation.”

In 2014, dying from cancer, Rosenberg used a DNA test to locate “his birth parents [who] had married, and he had three full siblings.” The mother, Margaret, had also tried but failed to break through “the silence and secrecy.”

The biological parents had been teenagers at the time of the adoption when their white male dominated society “viewed women who’d become pregnant out of wedlock as deeply neurotic social deviants.” Margaret was “part of a growing demographic of young women who for decades would feel shame and stay silent.”

In the times before legal abortion and contraception, this system provided a solution for babies needing homes. For millions of infertile American couples “the plight of women like Margaret was an opportunity, the ideal solution to a painful problem.” Some of these couples never told their child that he or she is adopted.

The first chapters present the story of this unwed mother to illustrate how the post-World War II baby boom included millions of Americans not fertile married couples. Each situation was different although the author in “Blue Ribbon Babies” describes how the system in the 1960s worked overall.

“It was the work of an array of institutions, from researchers whose pseudoscience justified the advantages of unproven practices, to adoption agencies that stood to profit.” Studies and tests were conducted, often to try to document preconceived ideas. Results of any value traveled slowly.

The author includes a basic account of how the modern phenomenon of adoption came from “Americas’ shifting understanding of what makes a family.” It is a grim history of disease, immigration, labor, poverty, race, sexism, and suffering. The horrors were well-known and set the stage to excuse a “humane” system that too often proved anything but as in the famous case of celebrity Joan Crawford.

“Margaret was coming of age with a generation that was asserting its independence in an era of social rigidity” but change came slowly and the effects lasted lifetimes. In Rosenberg’s case, Margaret was lied to and pressured, as also were the adopted parents.

The author discovered that “more than 3 million mostly unmarried young women” in America in the decades after World War II “found themselves funneled into an often coercive system they could neither understand or resist.”

Gabrielle Glaser witnessed Rosenberg’s struggle and explores the author’s own feelings about family identity. As a reporter in Oregon, this mother of three daughters had covered “adoption, surrogacy, and reproductive techniques” in the “increasingly complex, scientifically enabled ways of creating families.”

Glaser reports the story Glaser sought to find, “one of loss, love, and parallel searches for identity,” “that adoption always equates with loss for the adoptee.” The author has views colored by the extermination of Jewish families in the Holocaust.

American Baby leaves out much. It does not explore the adopted who do not want to know their biological relatives or mothers not seeking the children they placed in adoption, or how some reunions prove disappointing or negative.

“The conflict over whose rights deserve protection rages on.” No mention appears of the positive efforts made by many states to facilitate adoptees meeting their biological parents.

This book ends with a plea from the author for revisions to existing laws to allow for better opportunities for adoptees to reunite with biological parents. American Baby provides a meaningful discussion on where we have been on and how we need to change the adoption system.

Rosenberg’s story “does not have a tidy ending; it is never a tidy story.” This book has annotations and photographs.