America by Heart : Reflections on Family, Faith, and Flag 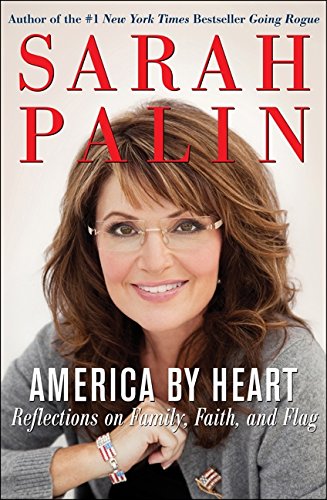 On the heels of her first offering, Going Rogue, Sarah Palin follows with a series of essays offering her unvarnished and unapologetic opinions on Family, Faith and Flag, including the role of women, the importance of basic American values, and need for the country to once again take up the mantle of Constitutional conservatism.

Feisty, and self-sufficient, she is at home in the boardroom, out hunting or fishing, and mostly with her family in Wasilla, Alaska. Alaskans, according to her, are a breed unto themselves, railing (prior to statehood) under the constraints of being a possession of the U.S. without representation. She praises them for enjoying their new rights, but also shouldering the responsibilities of full citizenship. Growing up in such an unforgiving environment, she is no stranger to fighting the elements, be they harsh Alaskan winters or actual grizzly bears. Alaskan life prepared her for the campaign trail as John McCain’s running mate in 2008.

Ms. Palin’s distinctive voice is informal—a voice of the everyday person. In much the same way Rogue was an opportunity to give her side of the campaign story, America By Heart is her own bully pulpit for upholding the Constitution, basic American values of patriotism, personal responsibility, faith in God, and strong families. These essays provide an opportunity to see her as a real person, outside of the glare of the media’s klieg lights.

With many supporting points drawn and quoted from the writings of statesmen and ordinary people, the author makes no bones about her opinions. They are hers and she is entitled to them, but there is a tendency toward rambling and repetition in some of the chapters. Her sentiments are most genuine relating to her own family. She credits husband “First Dude” Todd, as a provider of unconditional support, and the Palin troop as a well-working team.

Her thoughts are wide-ranging, dealing with America’s awakening –“the spark of patriotic indignation that inspired the Americans who fought for our freedom and independence has been ignited once again!” There is lavish praise for Americans serving in today’s armed forces. (Track, her oldest son, served in Iraq.)

Her love of family is evident throughout as is the belief that strong families are the basis of a sound future for this country. She extols the virtues of America while conceding that we cannot be blind to its flaws. Criticism of recent administrations is lavish, but there is little to indicate how she would handle similar situations. Sarah Palin has become both a tipping point—giving momentum to the Tea Party movement and a lightning rod for scrutiny and criticism by the press.

America By Heart is exactly that: from the heart. Read it and see a side of a strong woman who counts herself among the nation’s “Mama Grizzlies”—a new generation of American women leaders who are not afraid to “do it all” by building careers and raising families, all in the service of fighting for the futures of their children. It is unlikely that any of what is written will convince supporters or detractors to change their original opinions on the issues she raises . . .