America on Fire: The Untold History of Police Violence and Black Rebellion Since the 1960s 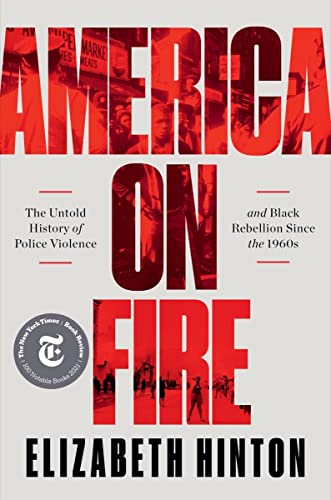 “‘what were long assumed to be urban Black ‘riots’ were, in fact, rebellions—political acts carried out in response to an unjust and repressive society.’”

America was born from the “original sin” of slavery, and now, four centuries later, slavery has morphed into systemic racism.

One of the ways this racism is socially played out is the innumerable police killings of Black males for minor incidents or in unprovoked confrontations. One such incident was the killing of George Floyd in Minneapolis in May 2020 that led to an estimated 7,750 protests across the country involving 26 million people.

These protests were often denounced as “riots” by local officials, law enforcement officers, and the media, but was something else going on? This is the question at the heart of Yale history professor Elizabeth Hinton’s groundbreaking new study, American on Fire: The Untold History of Police Violence and Black Rebellion Since the 1960s.

“Riot” is a provocative term used to denote militant domestic protest involving violence and serves as the corollary to “terrorism” used to denote international nonstate conflicts. Hinton questions the legitimacy of term as applied to the mass civil unrest that took place between May 1968 to December 1972. She reports that popular outbreaks occurred in 960 Black communities that saw 1,949 separate disturbances, resulting in 40,000 arrests, with more than 10,000 people injured and at least 220 killed.

As Hinton insists, “what were long assumed to be urban Black ‘riots’ were, in fact, rebellions—political acts carried out in response to an unjust and repressive society.” She adds, “the tens of thousands of Black Americans who participated in this collective violence were rebelling not just against police brutality. They were rebelling against a broader system that had entrenched unequal conditions and anti-Black violence over generations.”

Since the Civil War, the U.S. has witnessed repeated waves of race-based “riots.” The first “great riot” of the modern era was the Draft Riot of 1863 that took place in New York. Lasting four days, July 13–16, it was a violent white working class reaction to the imposition of the Civil War draft. White rioters violently attacked African Americans, shooting some, lynching 11 others, and throwing stil others into the river to drown. An estimated 120 people were killed and 2,000 injured. Union troops who had fought in the Battle of Gettysburg were called in to finally quell the riot.

Riots during the 20th century cluster in two phases—during the first half and during the second half of the century. The riots of the first half of the 20th century follow the pattern of the Draft Riot in which whites (including many policemen) attacked African Americans.  These riots peaked between 1917 to 1921, in what was known as the “Red Summer,” reflecting the social dislocation precipitated by industrialization, the Great Migration, and World War I.

The second wave started with the Harlem Riot of 1935 and peaked between 1964 and 1972. They involved African Americans (and also Hispanics) venting their rage against racist conditions (e.g., ecomomic discrimination, mounting urban dislocation, police brutality).  During this period, the character of “riots” changed, becoming fierce rebellions against urban racial injustice.

The era’s uprising began inauspiciously in New York. In July 1964, a standoff took place between James Powell, an African American teenager, and Thomas Gilligan, a police lieutenant. After a chase, the youth reportedly pulled a knife and slashed the officer who, in turn, pulled his revolver, shot and killed Powell. The incident took place on East 70th Street and fueled a riot that last six days; it saw rebels throw Molotov cocktails and police firing more than 2,000 shots. Remarkably, only one person died.

She carefully considers the violent protest that erupted in the Watts section of Los Angeles during the hot August 11–17, 1965, period. An initial confrontation between a Black motorist and a white highway patrolman was followed by a scuffle that drew a crowd incensed by the mistreatment of the motorist and his fellow passengers.

An estimated 30,000 people filled area streets, throwing rocks at police, attacking white residents, and setting buildings aflame. Martial law was declared, a curfew implemented, and 4,000 National Guardsmen were called to assist some 1,600 local police. The outbreak left 34 dead, more than 1,000 injured, and about 4,000 arrested. Most illuminating, she details how two of the LA toughest street gangs, the Bloods and the Crips, forged an alliance that not only ended turf wars but brought some modest recovery to Watts.

She also reconstructs the July ’67 uprising in Newark, NJ. The arrest and beating of a black taxi driver—combined with the local police’s refusal to address civil rights activists’ demands—precipitated the social uprising. Peaceful protests turned violent in the face of harsh police reactions, with residents throwing bottles, rocks, and Molotov cocktails at the local police station where the driver was being held. Three days of rioting led the governor to call in the National Guard that engaged in a form of urban warfare to quell the civil disturbance. Some 1,500 people were arrested, 725 injured and 26 killed; property damage was estimated at $10 million.

The simmering wave of uprising came to a head in 1968 following the assassination of Martin Luther King. In April, King had gone to Memphis, TN, to support striking African American sanitation workers and was shot while staying at the Lorraine Motel. King’s killing precipitated riotous protests in more than 110 cities.

In Washington, DC, some 20,000 people participated in widespread looting, arson, and attacks on police that reached two blocks from the White House. Local police, the National Guard and Marines were required to put down to mass rage that left more than 1,200 buildings destroyed, 12 people dead, and an estimated $27 million in damages. In Baltimore, local police, state National Guard, and some 5,000 federal troops were called in to put down the riot; some 4,500 people were arrested, 700 injured, and seven killed.

A similar story played out in Chicago were the riot engulfed a 28-block area of the West Side, with stores and homes looted, buildings set on fire, and violent confrontations between residents and police. About 10,000 police officers and 6,500 National Guardsmen were deployed; 2,150 were arrests and 11 were people killed.

During the 1970s, Latinx riots occurred and continued into the early-’90s with over 200 rebellions in Latinx communities following King’s assassination. Many uprisings occurred in major cities in the northeast, especially among New Jersey’s Puerto Rican communities.

In addition, a mass protest occurred on June 13, 1971, in Roosevelt Park, Albuquerque, NM, following an attempt by police to arrest a young man standing in a crowd of several hundred rowdy youth. A small scuffle escalated into a brawl leading officers to fire upon the crowd, wounding at least nine people. Outraged, nearly 500 youth moved into the downtown area where they overturned cars, shattered windows, looted, and severely damaged and destroyed buildings. Mass disturbances also occurred in small communities like Coachella, CA.

While the ’60s rebellions peaked in ’72, riots persisted. One that Hinton does not discuss took place in August 1991 in Crown Heights, Brooklyn, NY, between Hasidic Jews and Blacks (both African American and Caribbean) following a car crash. The car was driven by a Hasidic resident and resulted in the death of two black children. In the three-day riot that followed, a Black resident stabbed and killed a Hasid male while some 40 civilians and 150 officers were injured.

That same year, Los Angeles police officers beat Rodney King, and the incident was captured on videotape and repeatedly aired on television. In 1992, an all-white jury acquitted the police officers that precipitated six days of mass protest in predominately African American areas of Los Angeles, leading to widespread lootings and standoffs with police. Thousands were arrested and 50 died; property damage was estimated at $1 billion.

America on Fire combines a series of well-researched case studies of individual popular Black uprisings with a careful analysis of the social conditions (e.g., unemployment, poverty, mass incarceration) and governmental actions (e.g., Kerner Commission, War on Crime, War on Poverty). It provides a well-rounded and rigorously account of the complexity a unique episode in American history often dismissed under the misleading notion of “riots.” As Hinton reveals, much more was at stake.

Finally, Hinton provides an invaluable appendix, Timeline of Black Rebellion, that details every uprising between 1968–72 and beyond.

Today, a half-century later, police killings of unarmed African Americans like George Floyd persists. But instead of provoking 1960s rebellions, they have ignited mass social movements represented by Black Lives Matter that may—“may”—have more lasting and meaningful social outcomes that finally address the systemic racism that has so long defined American life.