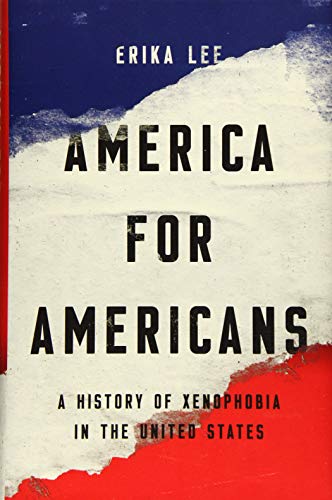 In 1775, Benjamin Franklin warned that “swarthy” foreigners were flooding the American colonies. Germans will soon “outnumber us,” he said. “Why should Pennsylvania, founded by the English, become a colony of Aliens?” he asked. Erika Lee’s thoughtful America for Americans argues Franklin’s alarm nearly 250 years ago kickstarted a fear of foreigners that continues in the U.S. to this day.

“The arguments used against Germans established a template of anti-immigrant attitudes, prejudice, and rhetoric that would be repeated and refashioned for later immigrant groups,” she writes. “These would harden into a core ideology of xenophobia that would endure across the centuries: there were too many foreigners; they were too strange and different; they were not assimilating; they threatened peace and security.”

By the same token, each despised immigrant group has generally found eventual acceptance, says Lee. Today, more Americans claim the German heritage that so troubled Franklin than any other ancestry.

Lee is an historian who directs the Immigration History Research Center at the University of Minnesota. A grandchild of Chinese immigrants, she visited the archives of many universities to research this book—a standout among a flurry of recent titles on immigration—and confesses writing it “sometimes literally made me sick.”

She offers overwhelming evidence that xenophobia is not an aberration, but a “constant and defining feature” of U.S. life.

Indeed, it is a message that “resonates” throughout American history, from the anti-Catholic agenda of the Know Nothing Party in the 1850s, to the Chinese Exclusion Act of 1882, to the setting of race-based immigration quotas in the Immigration Act of 1924, to the removal and incarceration of Japanese Americans after Pearl Harbor, reaching its “logical evolution” in the anti-Mexican and anti-Muslim rhetoric of President Donald Trump.

There have been extraordinary moments along the way.

On August 6, 1855, in Louisville, Kentucky, Protestant mobs attacked German and Irish Catholic neighborhoods, killing at least 22 people, in one of the worst anti-immigrant riots in American history, known as “Bloody Monday.” Within the next year, similar violence occurred in Chicago, St. Louis. Cincinnati, and New Orleans.

In 1916, President Theodore Roosevelt urged immigrants to fully assimilate, pledging “unconditioned and unqualified” allegiance to an “America for Americans.” Several years later, in a 1920 pamphlet titled “America for Americans,” the Ku Klux Klan, claiming to speak for “all true Americans,” condemned the “flood of foreigners” pushing the “native born” aside.

Lee emphasizes that “Americans’ embrace of immigrants and their fear and hatred of them have coexisted as equally strong forces shaping the United States.” The “good immigrants” behave, assimilate, and accept the status quo, she says. They have often served useful roles, settling property seized from Native Americans, and providing cheap labor for American business. “Bad immigrants” come without authorization, do not assimilate, rely on welfare, and hate America.

“Previously demonized communities (Germans, Irish, Italians, Chinese) have been remade into “good” immigrants while others have remained or become ‘bad’ (Mexicans and Muslims).”

Always present, xenophobia flairs in times of economic, political, and social crises; in wartime; and during periods of rapid demographic change, says Lee. It is “easily weaponized” in times of change and anxiety.

Her book recounts the careers of well-known racists including Lyman Beecher, Samuel F. B. Morse, and eugenicist Madison Grant (The Passing of the Great Race); the rise of Asians as a “model” minority; and the ways in which racial anxieties and bias continued to shape immigration even after national origin quotas were abolished by the Immigration Act of 1965.

Too often, she says, Americans are ignorant of the anti-immigrant sentiment’s role in U.S. history, and mistakenly write off events like the incarceration of U.S. citizens of Japanese descent in World War II as “mistakes.”