America’s Battle for Media Democracy: The Triumph of Corporate Libertarianism and the Future of Media Reform 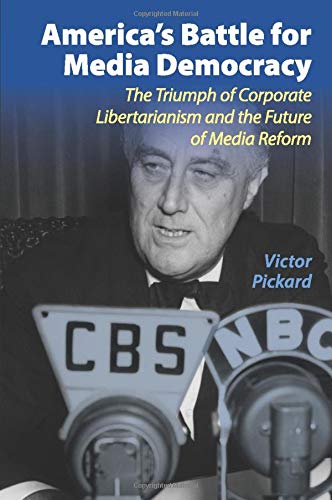 “America’s Battle for Media Democracy is an important adjunct to the body of literature regarding media democracy.”

Victor Pickard is a relatively new author on the subject of media policy and history. In a well-documented and thorough treatment of the subject, he illustrates what has been done to reform the media, but each attempt appears to lack the necessary “heft” to push back against the corporate giants.

The genesis of today’s situation finds its roots in the the Post-WWII era when giant corporations set the stage for a high profit margin and only a tepid nod to public service requirements.

There were, according to the author, other options than the road that was taken. A different media system was—and still is—possible; however, it involves overcoming the resistance of formidable giants. Much is written about the post WWII era and the results of policies that were put into place at that time. However, little was done to synthesize this information until now.

After WWII, America was ripe for change. “Media reform activists helped advance policy interventions and experimental models, ranging from non-profit ventures to strong public interest mandates for commercial news organizations.” This unleashed a spate of reform measures, including the birth of the FCC, anti-monopoly measures. Four significant attempts include:

“The Hutchins Report set the normative dimensions for press requirement within a democratic society—and is now widely considered the blueprint for responsible journalism. . . . (Originally this report was met with hostility from the newspaper industry). Nonetheless, elements of the report were gradually incorporated into many journalism schools’ curricula as a core set of media ethics.”

While not entirely successful, these efforts sought to ensure that profit was not the only element of importance. Still, none had the force of big business in moving the agenda of the media forward. The author sees the present circumstance as a time when change is possible.

“Now is an opportune moment for renegotiating the resolutions of the 1940s—a second chance to forge a new social contract, one that rescues media from  endemic market failures to create a more democratic system.”

Today we decry 200 TV Channels and nothing to watch. The listeners of radio in the 1940s felt the same way about “soap operas” and the low-grade (and sometimes racist) quality of programming. Reform and defense of free speech arguments proliferated, but did nothing to enhance the quality or the focus on the public good.

The point has been made indicating that the policies and mistakes of the 1940s set the stage for years to come. But this “bell” tolls throughout the book as the underlying premise. The author appears to target an audience of “anyone concerned with media and politics and/or historians interested in the consequence of poorly executed policies and their legacies.”

Yet it is doubtful that this book will be read by members of grass roots organizations, which is another element recommended to launch significant change in current policy.

Another theme emerges: that of a timid FCC and/or reformers who continually concede power regarding first amendment rights or vague, unenforceable language regarding regulations

In his conclusion, the author brings the crisis of journalism to the problem of the digital age. Here we see the same disparities of access, costs for service and oligopolies. We see the same problems of the 1940s revisited. The public good falls prey to the profit and power motives.

“As an essential public service with social benefits that transcends its revenue stream, journalism is such a (public) good. In its ideal form it serves as a rich information source for important social issues, and adversarial watchdog over the powerful and a forum for diverse voices and viewpoints.”

In 2011, for example, the FCC issued a report entitled “The Information Needs of Communities” it suggested only a minor role for public policy in addressing contemporary needs and reinforced the anti-regulatory mantras of years past.

There is hope. “Government has a legitimate duty to step in where  the market has failed” America makes a poor showing among developed nations with regard to internet access, speed and cost. The author suggests broadband community initiatives in those states that have not passed laws prohibiting municipalities from offering these services (There are 30 such states).

Government can also regulate content if it sets its policies to do so. Media Company owners cry “First Amendment rights.” The author cites the content and opinions offered by the BBC, which do not always concur with the subsidizing hand of its government. Strengthening existing Public Media Outlets would also assist in this endeavor.

Are we truly at a crossroads with potential reforms possible? Representatives from various sectors are now vested in changing the status quo, (especially those whose jobs are in jeopardy). Is the infrastructure supporting these ideas strong enough to carry them through? That is unclear.

Are we willing to test alternative models and rise above the protected status quo, or will the opportunities once again be lost as they were in the reforms attempted in the post 1940’s era. It is unclear whether the author is optimistic here, but at least he offers some ideas that could be tried.

Where will this initiative originate if not with government? Is government (given the evidence of the 2011 FCC report) lukewarm in its motivation to intervene? The future remains vague, and true change is uncertain.

America’s Battle for Media Democracy is an important adjunct to the body of literature regarding media democracy. The reforms lack the muscle that could only come from some sanctions on media conglomerates and license revocation made possible.

Given the revolving door of media workers migrating between the public and private sectors and the bevy of lobbyists advocating the status quo, expecting major policy changes could be wishful thinking.

Let us hope Victor Pickard is right in being optimistic.