The Amber Shadows: A Novel 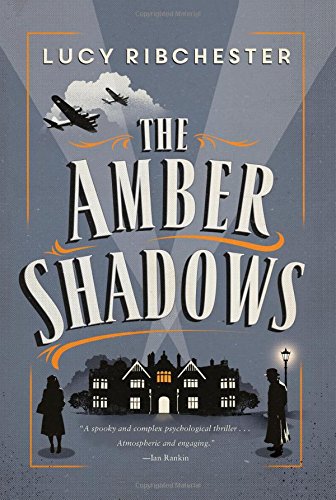 ". . . the nonlinear narrative style takes a long time to arrive at whodunit, howdunit, and why."

Secrets are seductive and the core of psychological mysteries. In The Amber Shadows, Honey Deschamps is seduced and betrayed by secrets, starting with where she works: behind a closed door in official secrecy at the infamous Bletchley Park in England during World War II.

Bletchley Park is where the Allied machinery of code-breaking operated 24 hours a day for years, employing hundreds of people selected for their brains and integrity, in top-top-top secret. It’s believed that their efforts shortened the war. But more than one person melted down under the conditions.

Honey gets well set up for her own breakdown. The stress of the job, along with the wartime restrictions imposed on everyday life, is more than enough to drive anyone loony; but then she starts receiving anonymous packages in the mail, postmarked from Leningrad—which is under siege by the Nazis. So how did the packages get out? Who is sending them? And why?

She suspects the sender might be her long lost father, signaling her for help. Not the father who gave her the Deschamps name, but the one who gave her life, and whom she hasn’t seen since early childhood.

Ivan Korichnev was a Russian composer-conductor. He instilled in her older brother Dickie a reverence for ballet, classical music, and fairy tales; and instilled in both Dickie and Honey an aptitude for coded communication.

Ivan purportedly came to be the custodian of the famous Amber Room in Leningrad, billed the “eighth wonder of the world” before being looted by the Nazis. So when what appears to be pieces of it arrive in Honey’s hands, she is propelled into a labyrinth of secrets upon secrets, where speaking to anyone about any secrets violates the Official Secrets Act—punishment for which is severe.

Yet Honey has to turn to someone for help as she seeks the source and reason for the “gifts.” But everywhere she turns, she meets people who turn against her.

The amber pieces eventually fit together into a puzzle of their own, which Honey must decode. The story covers her efforts to do so, stepping back into her personal history and sideways into her life at Bletchley Park. Ultimately past and present crash together, and people start to die or disappear.

While the mystery itself is compelling, the novel’s most intriguing elements come from depictions of life in England during wartime blackouts and rationing. These are things we hear about in historical reporting, but don’t get much information on what it was actually like.

The author—way too young to have known the conditions personally—expresses in a note at the end of the book how she gathered first-person reminiscences from relatives and others who lived and worked at Bletchley, which she then supported with research into the broader aspects of the war in general and Bletchley Park in particular. Thus, she builds a realistic setting that makes Honey’s situation informative and believable.

There are so many layers of secrets, however, that it becomes hard to keep track of them. Thankfully the viewpoint stays inside Honey’s head rather than hopping around between characters. Her escalating paranoia, while understandable, does start to pall while curiosity about the mystery heightens. This might move some readers to start skimming, as the nonlinear narrative style takes a long time to arrive at whodunit, howdunit, and why.