The Ambassadors: America's Diplomats on the Front Lines 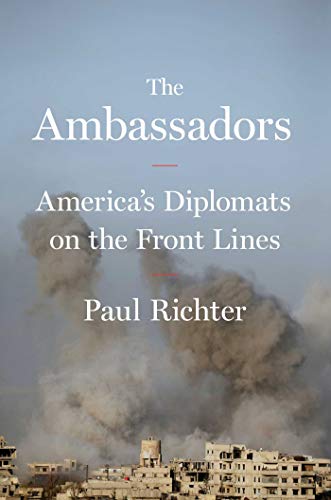 This book needed to be written, especially in this time when diplomatic peacemakers are mocked, their opinions are ignored, and their accomplishments are not well known. Paul Richter has brought them from the shadows to the main stage so everyone can hear their remarkable story.

Richter chose four career diplomats: Ryan Crocker, Chris Stevens, Anne Patterson, and Robert Ford. These were not the dilettante political donors who get the presidential appointments to cherry ambassadorships in beautiful capital cities of the world. These people got the ugly war zones in the most perilous parts of the globe: Iraq, Pakistan, Afghanistan, Egypt, Syria, Libya. The very names make one cringe. Chapter One’s title is illustrative: The Best People for the Worst Places.

The best, indeed. All four ambassadors endure decades of up-close experience with Washington’s political turmoil and arrogance, host countries’ duplicitous leaders, a multitude of convoluted indigenous parties, horrific terrorist organizations, and constant danger and frustration. All narrowly miss death several times. One of them is killed.

But amazingly, what comes through in this book is that in spite of the daunting odds, each of them loved their work and were genuinely good at it. They volunteered for these places. Speaking to students planning foreign service careers at Stamford University, Crocker summed it up succinctly, “Do you really want to spend your career in Brussels, Paris, or Berlin? Or do you want to be out where the action is?”

Action is something those scary places have plenty of, and as a veteran writer on foreign policy and national security, Richter realized these ambassadors were at the center of it all. They knew where the bones were buried, both figuratively and literally. As he puts it in his acknowledgments, “The inner circles must have a lot to say, I thought, both about their postings and, more broadly, about America’s trials in the greater Middle East. When I sat down with them, I was not disappointed.”

The reader won’t be disappointed either. Richter’s book is no dry recitation of international relations. With stark clarity, he provides the insider accounts of decisionmakers inhabiting the murky heart of no-win conflicts, including presidents, generals, diplomats, secretaries of state, foreign leaders, rebel chieftains, and religious zealots.

This book shows how these four ambassadors dealt with those personalities while attempting to carry out overall U.S. policies. Richter’s pacing and vivid descriptions of people, places, and events make for a true page-turner. Part intriguing spy story, gripping war story, and compassionate love story, the book brings the reader right into the action Crocker loved. Emerging from this book, readers will have a much greater grasp of the America’s victories and failures in the Middle East.

The Ambassadors is an excellent book for any government leaders, academics, business leaders, and citizens who wonder exactly how we ended up where we are in the world. Highly recommended.

Robert N. Macomber is a staff writer at New York Journal of Books.