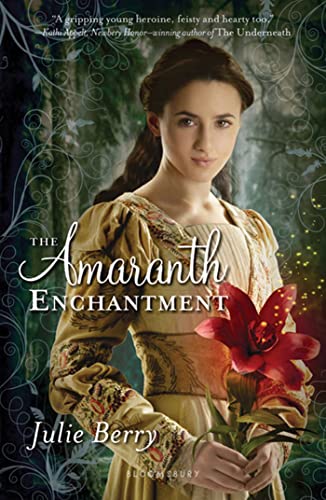 The Amaranth Enchantment starts with a memory of a child’s view of her parents, perfect and glowing and beautiful, any faults forgotten ten years after they went to a fancy ball and never returned. It sets up a story where a girl who once had it all now has to deal with next to nothing, and less than that when she’s kicked out of her uncle’s home after he dies.

Without income, shelter or friends, Lucinda falls in with Peter, a charming rogue of a thief who has the ambition of becoming a lord when he’s gathered enough funds to buy the title, and with Beryl, a woman locally called the Amaranth Witch, who was blamed for a curse on the queen and who happens to be something other than human.

The story told is vaguely the Cinderella story, but it’s also the plot of many other fairy tales—the poor and undervalued girl manages to become a princess—but the reasoning behind the steps that get her to that happy ending are loose and somewhat unsatisfactory.

It’s all very pretty, and young girls could easily fall in love with the lush descriptions of the palace, the clothes, and the lives led in both, but in the end, Lucinda seems to be somewhat dense and limp as a main character, and she doesn’t seem to earn much of the princesshood that comes to her so much as she happens to be pretty enough and in the right place at the right time. She’s fun to read when she’s talking to someone, especially if that someone is Peter, but her internal monologue waffles more than it needs to, and she makes decisions that sometimes don’t make sense.

Similarly, the prince is not so much charming as he is attractive, though he does improve when he stops mooning around and starts ruminating a little, which deepens his character and adds a bit of conflict to his portions of the story.

Beryl, in the role of fairy godmother, is too inhuman to really invest as much emotion in as the book wants us to, and her dark past is directly responsible for how horrible Lucinda’s life has been since her parents died. Coxley, as the villain, is appropriately fierce and terrible, but there’s almost no motivation behind his evil, and it’s hard to think that no one would have surmised that evil before the climax.

In fact, the only character that really seems alive is Peter, who jokes and broods and thinks of the future in a way none of the others do; and it is thus that most of the cleverness in the book’s dialogue went to him. It’s a shame that so much of his story happens off screen, and it almost seems as if he was put there on purpose, because when Lucinda is with him, she’s more interesting than she is when she’s with the prince, and as this is a fairytale, she couldn’t not marry a prince.

This isn’t a bad book. In fact, it has an interesting alternate-reality version of English court life somewhere around the 1700s, its locations are beautifully detailed and appealing, its overall plot is sound, and it has many small details that converge nicely at the climax. The two main characters work well together. The other world Beryl comes from is beautiful. The magic system is intriguing and deserves more of a chance to be understood.

The problem is that these good points really deserve more of a work-through than this book allows, cramming all the events into only a few days, and thereby cutting off the depth and emotional investment that comes from getting to know the characters. The story is interesting and detailed, and it inspires a fondness for the characters, but in the end, it seems as if so much of it was short-handed.

The Amaranth Enchantment seems to underestimate the intelligence of its nine-to-twelve-year-old target audience, almost as if were purposefully dumbed down to their perceived level of comprehension from some other, darker book, rather than trusting them to be wise enough to understand that not everything is pretty and shiny and perfect. It would have been more powerful if it had lingered on some of the badness more: Lucinda’s aunt finding out that the reason she’s so bitter is because of the witch she’s so superstitious about; the townsfolk being afraid of the woman they’ve dubbed witch; Coxley and Beryl’s rivalry and confrontation; the differences between the royal upbringing of the prince and the poor upbringing of Lucinda and Peter; and so on.

It would have been more powerful still if Lucinda had been trusted to solve her own problems instead of having to be saved after she’s spent 300 pages being established as headstrong and sure of herself and clever enough to survive even after she’s abandoned in the middle of winter. Preteens are smart enough to deserve a more thoroughly explored world.