Always On: How the iPhone Unlocked the Anything-Anytime-Anywhere Future--and Locked Us In 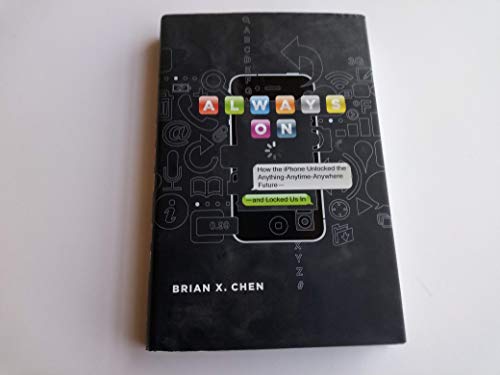 “[Always On] is a page-turner for technophiles, but weaves enough humanity into the topic to keep most readers engaged.”

That the iPhone started a tech revolution is hardly news; however, the depth to which the iPhone and its progeny have affected, and will continue to affect, our daily lives continues to surprise everyone. It is that depth that author Brian X. Chen plumbs in his first book, Always On: How the iPhone Unlocked the Anything-Anytime-Anywhere Future—and Locked Us In.

The basic tenant of the book is that “[e]ven Steve Jobs didn’t know what he had on his hands when he announced the original iPhone as a combination of a mere ‘three revolutionary products’—an iPod, a cell phone, and a keyboard-less handheld computer.” It is that last element that author Chen, rightfully, dwells on for the majority of his book.

Just as a desktop computer can be an advanced word processor, video editor, database, and communication device limited only by the currently utilized program, so too is the iPhone anything you want it to be, with some 350,000 and growing programs, or “apps.”

The difference is that this particular computer is small enough to take almost everywhere, powerful enough to do any number of tasks, and always on—as the book’s title asserts. “In many ways the iPhone is the first gadget to come close to fulfilling our dream of the perfect device—the one that does it all—like Dick Tracy’s radio-communication wristwatch or James Bond’s lock-picking, fingerprint-scanning cell phone. Such is the undeniable appeal of a device whose minimal hardware disappears and, in the form of an app, becomes anything its owner wants.”

Mr. Chen quickly gives an overview of the device, both to end-users and developers, and shows the staggering impact the iPhone has had on industries and individuals. Consider the fact that Microsoft lost almost one-third of its mobile software market by the third quarter of 2009 after the device made its debut. Or the case of Dan Woolley, a man trapped under rubble after the 2010 Haiti earthquake who used his iPhone to treat his wounds via a first-aid app; he even used it to keep him awake via the alarm function so as not to go into shock.

Mr. Chen opens up Always On with a first-person account of his own experiences with the iPhone and then switches seamlessly from macro- to micro-views of the product and its effects. The book is a page-turner for technophiles, but weaves enough humanity into the topic to keep most readers engaged. The book falters a bit about three-quarters in, as it goes farther afield with Mr. Chen’s musings on addiction and separation anxiety vis-à-vis the technology—but he quickly finds his way back.

Always On is a worthwhile read and offers the oddly satisfying ability to purchase the ebook version and read it on your own always-on device.