Alternate Side: A Novel 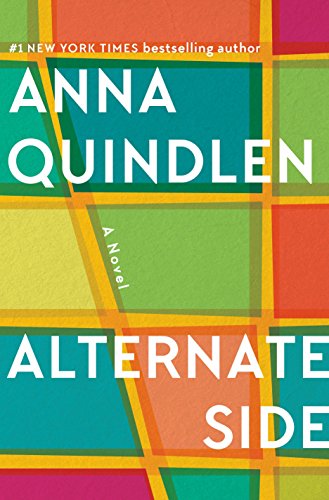 Alternate Side by Anna Quindlen is a novel in miniature. It tells the story of one small, dead-end block in Manhattan and tries to use neighborhood life to examine the larger world—the state of relationships between men and women, family life, inequality, violence, homelessness, immigration, and more.

But what stands out most for this male reader is the novel’s almost total disregard for men.
In lead character Nora Nolan’s world, men are children, boobs, boors, and Neanderthals incapable of containing their misplaced rage.

Quindlen has Nora catch sight of her husband and this is what goes through her head: “Sometimes Nora would look across the rooms at Charlie and feel the same way she did when she looked at her old oak roll-top desk and remembered how thrilling it had been to spot it across a dusty plain at an antique show, even though nowadays she mainly cursed its sticky drawers and splintery edges.”

The only two male characters who come off as multi-dimensional are Ricky the Latino handyman and a homeless fellow named Phil who, it turns out is only playacting at being homeless and actually has a home.

Quindlen is a good storyteller and Alternate Side zips along but it all feels so small, somewhat intentionally. The block is a microcosm of white privilege and mostly liberal elitism. We’re in Manhattan, and all the residents bought their brownstones on the cheap many years ago and are now sitting on millions in profit thanks the crazy New York real estate market.

But there is one thing nearly all of them covet—a parking spot in the block’s one small lot that faces the back side of a homeless SRO hotel. That gives the characters a chance to comment on the homeless. Generally, the men are snarling while the women understand.

When Nora’s husband Charlie, after many years of trying, gets his prized spot in the lot, he feels he’s made it at least, freed from the hassle of alternate side of the street parking. Nora thinks Charlie is a child and can’t understand his new lease on life. She figures he must be different from her despite decades of marriage and two children and of course, she turns out to be right.

The different emotions each of them feel over the parking spot is a harbinger of things to come. Charlie is fed up with the hassle of city life and wants to move, gasp, to the South. As Charlie tries to angle for the better quality of life, Nora begins looking for a way out.

But the novel is called Alternate Side for a reason, because parking on the block or its lack thereof is at the center of its action. It’s so difficult to get a “good” spot that Ricky the handyman is forced to park at the entrance to the lot despite many warnings not to. By doing that, he’s blocking his betters from exiting when they need to. It all comes to a head when one angry rich white guy—frustrated by being parked in—swings a golf club (or a tire iron, depending on who’s telling the story) at the handyman’s van and accidentally (or not) hits the handyman.

He is arrested and becomes a headline in the New York Post. Life on the block devolves.

The novel is told from Nora’s point of view and she is, as you might imagine, a New York superwoman. Wealthy New Yorkers keep offering her jobs unsolicited, and she shines in all of them. It’s no wonder she needs to dump poor Charlie who’s pining for a free parking spot. Nora dreams that the grass will be greener on the alternate side of this marriage and she heads there without much thought for childish Charlie.

After all, she does have her kids and a better job. Who needs an albatross of a husband?