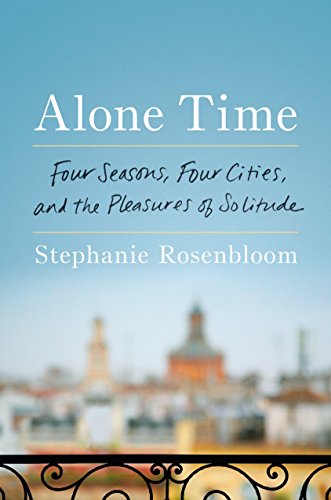 “Alone time gives us permission to pause, to relish the sensual details of the world rather than hurtling through museums and uploading photos to Instagram.”

In a society that is becoming more and more distracted, many people are genuinely fearful of the prospect of solitude but being alone can have its benefits, especially when traveling. Solo travel is becoming increasingly popular. Intrepid Travel, one of the largest adventure travel companies in the world, reports that half of its guests—some 75,000 people a year—are now traveling by themselves. Airbnb is seeing more solo travelers than ever. The number of searches on Google shows that solo travel is twice as popular as it was three years ago. But for many people, solitude is something to be avoided at all costs and associated with problems such as loneliness and depression.

“Solitude and its perils is an ancient and instructive story. But it’s not the whole story. The company of others, while fundamental, is not the only way of finding fulfillment in our lives.”

In Alone Time: Four Seasons, Four Cities, and the Pleasures of Solitude, New York Times travel staff columnist Stephanie Rosenbloom delves into the health benefits of traveling alone. The book spans one year and is divided into four parts with each section set in a new city during a different season. Sections include Paris, Istanbul, Florence, and New York. All are walking cities and people friendly and the text includes topics such as dining alone, learning to savor, discovering interests and passions, and finding or creating silent spaces.

Through on the ground reporting, insights from mental health and social science professionals and recounting the experiences of artists, writers, and innovators, Rosenbloom considers how traveling alone helps deepen the appreciation for everyday beauty, bringing into sharp relief the sights, sounds, and smells that one isn’t necessarily attuned to in the presence of company.

“Alone time is an invitation. A chance to do things you’ve been wanting to do. . . . You need not carry on polite conversation. You can go to a park. You can go to Paris. You’d hardly be alone.”

As someone who’s a string believer in the healing power of alone time, this book is personal and thought-provoking. As Rosenbloom writes, “Time spent away from the influence of others allows us to explore and define who we are.”

Overall, Alone Time is an excellent blend of intimate, in depth recollections of traveling alone as well as a self-help guide to mindfulness. It is a fascinating, light read and highly recommended for anyone planning on visiting the cities discussed. But be warned there is some repetitiveness in phrasing that is somewhat distracting, but with that aside, the pure joy of reading about these delightful cities negates any pitfalls. Overall, Rosenbloom’s writing style is warm and engaging and will most definitely have readers eager to set off on their own solo travels.