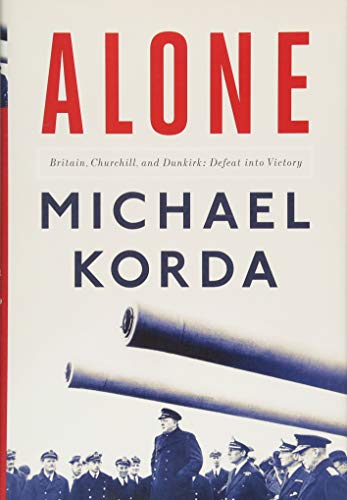 “Wars are not won by evacuations,” remarked Winston Churchill after 338,226 British and French soldiers were safely transferred from the beaches at Dunkirk to England in late May-early June 1940. Churchill was correct, but historian and biographer Michael Korda concludes Alone, his scintillating retelling of the miraculous rescue, by calling it “perhaps the greatest British victory of World War Two.”

What Korda means by this is that Churchill and the defiance of the British people transformed a “calamitous defeat into a legendary victory” that sustained the British people throughout the rest of the war, or at least until they acquired powerful allies—Soviet Russia and the United States.

Korda’s book is both history and personal reminiscence; he was a six-year-old boy from a famous and privileged British family in the spring of 1940. His Uncle Alex was a movie director and producer, and Churchill’s friend.  Some of Alexander Korda’s wartime films, such as That Hamilton Woman starring Vivien Leigh and Laurence Olivier (as Admiral Horatio Nelson), were funded in part by His Majesty’s Government for propaganda purposes.

Two-thirds of Alone tells the story of British and French political appeasement in the 1930s, the Nazi-Soviet invasion and partition of Poland, the fall of Neville Chamberlain’s government, the political ascension of Churchill as Prime Minister, Germany’s successful invasion of France and the Low Countries spearheaded by Hans Guderian’s panzers and Germany’s stuka dive-bombers, and the rapid collapse of will on the part of France’s political and military leaders.

As the French army surrendered and retreated (due to what Korda brutally but accurately describes as “the rapid metastasis of French defeatism”) and German forces neared France’s Channel ports, the British political appeasers led by Foreign Secretary Lord Halifax suggested coming to terms with Hitler.

These were the days when, in the judgment of historian John Lukacs, Churchill saved not only Britain but all of Western Civilization. Korda quotes Churchill’s response to those who sought to parley with Hitler: “We shall go on and we shall fight it out, here or elsewhere, and if at last the long story is to end, it were better it should end, not through surrender, but only when we are rolling senseless on the ground.”

Churchill’s defiance was infectious in Britain but it was too late for France. The whole British Expeditionary Force (BEF) and tens of thousands of French soldiers were trapped against the sea with German forces advancing against them in northern France.

One of the distinguishing features of Korda’s book is its emphasis on the courageous fighting of BEF soldiers during the retreat to Dunkirk. “The fighting troops,” he writes, “were exhausted, outnumbered, had been without rations for days, had been fiercely engaged with the enemy . . . and been bombed day and night.” Nevertheless they persevered due to “discipline and loyalty to their own regiment[s].”

Korda notes that the miracle of Dunkirk is remembered most for the “little ships” that put to sea to rescue the BEF and French troops. He emphasizes instead the “savage fighting” of the BEF that preceded and made possible the evacuation.

The often overlooked aspect of Dunkirk, Korda writes, is the “hard, unrelenting fighting of those British and French troops who were holding the perimeter, without whose sacrifices no evacuation could have taken place at all . . .”

The popular appeal of rescue by the “little ships” also obscures the fact that the bulk of the BEF and French troops were evacuated by warships of the Royal Navy and passenger steamers. Korda praises the planning and steadfastness of Vice-Admiral Bertram Ramsay who oversaw the logistics of the evacuation.

Korda, like other historians, speculates as to why German panzers halted before Dunkirk. Perhaps it was an overly cautious German High Command. Perhaps the German army was not prepared for the “stout resistance of a foe they thought had already been defeated.” Perhaps it was Goring’s hubris that the German Luftwaffe could finish the job. Perhaps Hitler believed that forbearance at Dunkirk would lead to a deal with Britain. We will likely never know for sure.

After the miracle at Dunkirk, Churchill made perhaps his finest and most memorable speech in which he proclaimed that Britain would fight on in France, at sea, in the air, on the beaches, and on the “landing grounds,” in the fields and in the streets. Britain, he said, would “never surrender.” “We shall defend our island,” he said, “whatever the cost may be.”

“Churchill,” Korda writes, “had turned words into weapons, and in the days ahead those words would do more than anything else to sustain the British cause, at home and in the United States.”

Korda believes, however, that Churchill finally won the hearts of his Party and the House of Commons as a whole when he announced on July 4, 1940,  that he had ordered the British fleet to destroy the French fleet anchored in Morocco to ensure that French warships would not fall into German and Italian hands. This tragic but necessary action also sent a message, writes Korda, to Berlin and Washington that Britain under Churchill “would act with unapologetic ruthlessness in the defense” of its vital interests.

After Dunkirk and the formal surrender of France, Britain fought on alone against what Churchill accurately described as “the foulest and most soul-destroying tyranny which has ever darkened and stained the pages of history.” Britain waged war at sea, survived the blitz, and won the Battle of Britain in the air.

Dunkirk, while not a victory, enabled Britain to fight on alone until, in Churchill’s unforgettable words, “the New World, with all its power and might, step[ped] forth to the rescue of the old.”