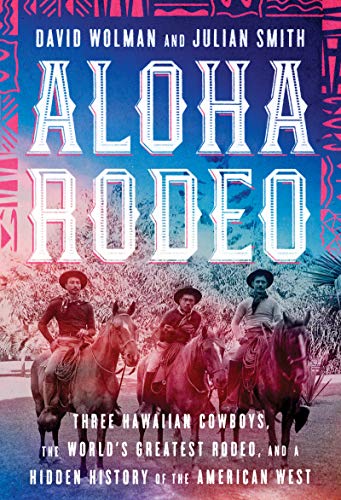 “[L]ong before the first mainland cowboy strapped on a six-gun, mounted a horse, and rode across Monument Valley or Texas’s King Ranch, expert horsemen were rounding up cattle on an isolated archipelago in the middle of the Pacific Ocean. Go figure.”

When most people think of Hawaii, they think of beaches, mountains, oceans, rainbows, and hula dancers. While that’s not inaccurate, it’s also not complete. In their new book, Aloha Rodeo: Three Hawaiian Cowboys, the World’s Greatest Rodeo, and a Hidden History of the American West, authors David Wolman and Julian Smith add a new entry to the list: paniolos—or cowboys.

The very term “cowboy” conjures up images of its own: wide open spaces, cattle, horses, and gunfights. America has developed its own mythology of the American cowboy based primarily upon the movies of Hollywood icons like Tom Mix, John Ford, and John Wayne. But long before the first mainland cowboy strapped on a six-gun, mounted a horse, and rode across Monument Valley or Texas’s King Ranch, expert horsemen were rounding up cattle on an isolated archipelago in the middle of the Pacific Ocean. Go figure.

The only question was when the paniolos of the Hawaiian Islands and the cowboys of the traditional American West would meet head-to-head to determine who was best. Aloha Rodeo tells us that happened in Cheyenne, Wyoming, in 1908, and, to the shock of the mainlanders but no surprise to the islanders, the question was settled in favor of the Hawaiians.

As the authors describe it: “This is the story of the rise of paniolo culture in Hawaii and rodeo in America, Wyoming in particular, and the remarkable year when those worlds collided. It overturns simplistic notions of cowboys and Indian, and explores questions of identity, imperialism, and race.” It is a story worthy of the telling—and equally worthy of reading.

The tale begins long before traditional notions of the American West took shape. In 1793, while the United States was still attempting its first fledgling steps as a nation, and decades before cattle ranches began dotting the plains west of the Mississippi River, British sea captain George Vancouver presented the Kingdom of Hawaii’s King Kamehameha I with a gift of longhorn cattle.

In a stroke of protectionism that nearly backfired, Kamehameha imposed a kapu forbidding anyone from harming the cattle. Within a few years, “[f]ierce and fearless, wild cattle soon overran every island where they were introduced.” That’s when a hardy group of locals rose to the task of taming these strange creatures and, in the process, created a legacy all their own. These were the paniolos.

The authors trace the development of Hawaii’s cattle industry, culminating with the massive Parker Ranch on the Big Island of Hawaii, which, “by the end of the [19th] century, was one of the largest ranches anywhere, with more than 20,000 branded cattle grazing on 300,000 acres.” Among the Parker paniolos were Ikua Purdy and his cousins Jack Low and Archie Ka’au’a, who would become unlikely heroes on the mainland in 1908.

That was the year they competed in the Frontier Days rodeo in Cheyenne, Wyoming, and shocked the western world with their prowess. Written off by the mainland press as “chocolate-colored rope throwers” who, the San Francisco Call taunted, “think they can show the product of the wild west a few things about roping steers,” they were initially regarded more as a curiosity than as bona fide cowboys.

That attitude reflected not just contempt for the Hawaiians’ skills, but more than a little racism mixed with ignorance. The authors note that, to mainlanders, “They were foreigners. It would have been radical to refer to them as American, and sheer blasphemy to point out that Hawaii’s cattle culture predated Wyoming’s—not that anyone knew.”

Wolman and Smith capture the excitement as the two cultures collided, and they provide the reader with “insider information” that, if known at the time, would surely have transformed the Hawaiians from underdogs to favorites. “Just as the binary conceits of the American West—cowboy versus Indian, civilization versus wilderness, good versus evil—were crystallizing in the national psyche, along came a small posse from afar whose story pushed back against such simplistic thinking.”

Aloha Rodeo teaches us that the world is a much bigger place than we often think and that maybe we should open our minds to the possibility that there are lessons to be learned from even the unlikeliest of places. Really? Cowboys in Hawaii?