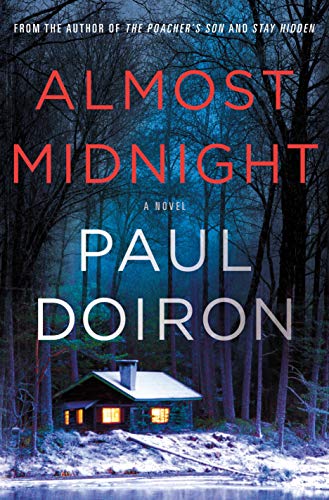 “a galloping good yarn peopled with realistic characters operating in an intimately evoked environment, perpetually dynamic. Such is the stuff that makes good stories . . .”

Actually, Mike isn’t a game warden anymore. Through nine previous volumes he has risen to become a warden investigator, which gives him new scope but limits his time in the wilderness. That’s disappointing for people who read the series for the setting, but the author manages to keep Mike plugged into his environment despite the shift in his career.

He also keeps Mike deep in trouble, maximizing his “OCD: obsessive curiosity disorder” and “uncanny aptitude at finding [him]self at the center of every hullabaloo” because of his “ability to focus in the midst of chaos, but that same focus inclined [him] to self-involvement and a careless disregard toward the people around me.” This combo leads him to “dwell happily in a state of constant chaos” while “some of us are just trying to get through our days without being fired or arrested.”

Mike risks career-ruining consequences almost every direction he turns. That doesn’t stop him from pursuing truth and justice with a morality and honor that we all want in our heroes.

In Almost Midnight he pursues three intersecting cases. First he is asked by his good friend, who’s in jail as a result of a previous adventure, to investigate a new prison guard who might be involved in lethal corruption within the system. Then, when Mike should be on vacation, he tracks down the person who tried to murder his released-to-the-wild wolf. These searches lead him into a mess between a white supremacist and his neighbors, who happen to be Amish families newly arrived in the area.

At the same time, Mike is stumbling through a new relationship, which is jeopardized by the complexities of his investigations.

All the threads weave together into a mega mess jeopardizing everyone, resolved in a night battle in the woods. But that’s merely the climax of an action chain that starts in the first chapter and barely pauses for breath throughout the book.

There’s so much action, in fact, that reading it almost gets exhausting—yet the prose is so smooth, and the character and situations so compelling, that you keep getting pulled along.

The only breaks come in short bits during scene transitions or setups. Many of these, often one-liners, capture wild Maine in a way that gives the series credibility and style.

For instance, on a raw April day after following a brutal road into the mountains:

“When I stepped out, I could see my breath like my spirit leaving my body. The temperature was at least fifteen degrees colder than it had been in the bottomland.” Nearby: “The clouds were falling on the valley now like curtains after a play.”

Any readers who live in the region will recognize such moments; and if readers live elsewhere, they will learn through similar details salted through the book a lot about Maine’s climate, country, flora and fauna, industry and people. That’s an adept skill in a novel so focused on action.

But it makes sense. Mike’s history as a game warden conditions him to be always aware of his surroundings and attuned to potentialities. As well, the author lives in Maine and has immersed himself in its land and culture. He also takes the time to research the technical and legal aspects of his novels.

When it’s all put together, we get a galloping good yarn peopled with realistic characters operating in an intimately evoked environment, perpetually dynamic. Such is the stuff that makes good stories and is extra impressive when an author can keep it going over the course of a long series.