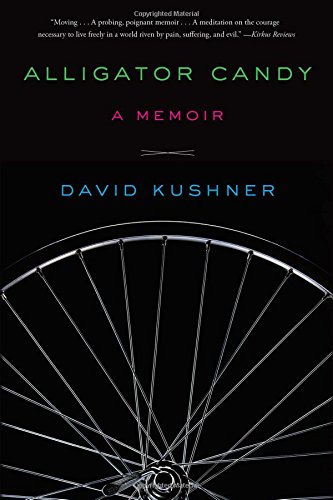 Long before Etan Patz disappeared on his way to school in SoHo, and long before parents suspected the worst might happen to their children at any moment, an 11-year-old boy was kidnapped and murdered in Tampa, Florida. The boy’s name was Jonathan Kushner and his brother David became a journalist who here gives witness to the harrowing times the Kushner family endured when their middle son vanished.

The date was October 28, 1973. David, then four, watched his brother Jonathan ride away on his bicycle. David eagerly awaited his brother’s return from a nearby 7/11 because Jonathan had promised David his favorite candy, a snapping alligator toy that spit out bits of candy. It was the last time David ever saw his brother.

What happened next to Jonathan and David, their older brother Andy, and their parents is truly the stuff of nightmares. That phrase is overused, but in this case, it fits too neatly to ignore. There will be no spoilers here because the drama of the book comes partially when David learns the whole truth, but when the horrible details are finally revealed, the reader is thankful Jonathan was already dead.

Alligator Candy is searing in its honesty and desire to look evil in the face, almost a wake-up call to remember that perversion and sadism existed long before the Internet in the age we thought of as innocent—1973.

Kushner’s masterstroke in this memoir is to tease out the details of the crime and the background of the killers. A lesser writer may have been tempted to shock the reader with the specifics of Jonathan’s murder, but that would have robbed this story of its power.

Before getting to the actual crime, Kushner does a fine job portraying his intellectual liberal Jewish parents and the family dynamic. He also goes deep into his own guilt and the way everyone who knew Jonathan second guesses the choices made that long-ago day.

Older brother Andy wonders what if he’d not tricked their mother into giving him a ride to school if she would have driven Jonathan to the 7/11; and David, who was only four, wonders if he’d asked Jonathan to go buy his favorite candy or if his older brother was going to the store anyway.

He doubts his own memory of the event and can only square the truth of that as a man and reporter when he is able to learn every morsel of truth from the day that changed his life.

It may sound odd to say that this is a book to be savored, but the events are so momentous it takes time—as it did Kushner—to process a crime and criminals who seem nearly inhuman. Sadly, they eventually are revealed to be oh so ordinary—and that’s the true horror.