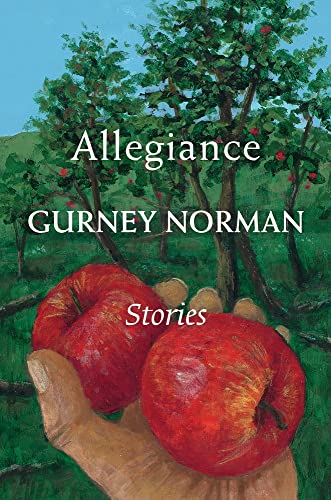 We seldom find a book that we have hoped for like this one. Many have read Gurney Norman's earlier Kinfolks: The Wilgus Stories (1977) and loved its family of characters and the richness of their voices and landscape. Having watched young Wilgus Collier come of age among a challenging yet loving family, one can now, after 45 years, witness his life as a mature and aging character in Norman’s fine autobiographical fiction collection: Allegiance: Stories.

These bright and humorous, sometimes sad yet always telling stories are both lyrical and dramatic; his sharpness of detail and flexibility of styles and tones remains central in his rich Appalachian world: "They burned several old mattresses, a couple of stuffed chairs, an old couch and about dozen worn-out tires in this fire, sending a column of black smoke rising above the trees where it billowed into a ball, then spread up and down Trace Fork to hover above us all like a shroud . . ."

Gurney Norman is a novelist and short story writer whose works include Divine Right’s Trip, Kinfolks: The Wilgus Stories, Ancient Creek: A Folktale and Allegiance. He is a professor of English at the University of Kentucky and a former Kentucky Poet Laureate. A native of eastern Kentucky and southwestern Virginia, he was the recipient of a Wallace Stegner Fellowship in Creative Writing at Stanford University among other awards. Norman is a widely known Appalachian literary and cultural advocate and is coeditor of Back Talk from Appalachia: Confronting Stereotypes, and An American Vein: Critical Readings in Appalachian Literature.

Norman cuts his characters from his life in these 40+ prose tales, each short and sweet. As Ed McClanahan points out, “In a rich admixture of memory and imagination, fiction and nonfiction, delivered in prose as clear and pure and beguiling as mountain music, Gurney Norman pays homage to his place and its people. This book is an act of grace.”

At the heart then of Gurney Norman and this book is this opening declaration:

“I PLEDGE ALLEGIANCE to Rockhouse Creek in Letcher County, however far I roam. I pledge to always visit my family’s graves, brother, mother, father, grandparents, aunts, uncles, cousins, scattered in the hills. I will always drive the old roads I traveled in my youth and still travel every chance I get, especially Route 7 from Jeff to Sandy Hook, through old coal camps and towns like Wayland where our football team in 1952 played a pretty good game even though we lost. . . . I pledge allegiance to Cudjo’s Cave in the saddle of the Gap, to the huge stalactite deep inside the cave that’s been hanging from a high vaulted ceiling for eighty million years. And to the memories of former times and local places—world of two-lane roads and single-lane bridges, certain curves and intersections and mere spots by the road where significant things happened, the curve where my brother died, the spot by the small bridge over Cane Creek where I stood with my father as we waited for the bus that would take him back to the VA hospital, the last time I saw him alive, I pledge allegiance . . .”

Commitment and care are central to his work. Like his Appalachian place, the book has many faces in short prose narratives. While Kayla Whitaker finds it “a reframing of the experience of loss,” Jim Minick finds “hope and discovery of ‘sweet apples even in the wreckage.’” Allegiance: Stories is all of this and more, a blessing by a veteran author.