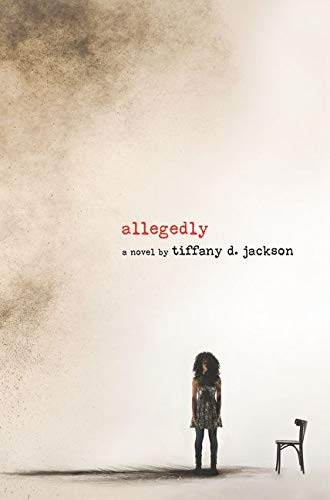 Allegedly by Tiffany D. Jackson is the story of Mary Addison who allegedly murdered a baby girl when she was only nine years old. Actually, there is no allegedly about Mary’s guilt since she cut a deal with the state for manslaughter, thereby admitting her guilt.

Nevertheless, Mary continues to mouth the word allegedly to herself, especially in the early parts of this book. No doubt, Mary was present when the baby died, but whether the killer was Mary or her mother is the open question that provides the dramatic tension for the book.

Actually, there is more than enough tension to go around. When we catch up with Mary, she’s 16 years old and living in a group home with a bunch of nasty, hate-filled peers whose only pleasure derives from making their own private hells that much worse. These girls have never received even the barest of breaks in their lives, which makes their surliness at least somewhat understandable.

And they all hate Mary because her crime has made her a minor celebrity, thereby giving her the one thing all youngsters crave—celebrity! Newspaper stories and books are written about Mary, all without her permission or, apparently, even a call from any of the authors.

Adding to Mary’s problems is that she falls for a boy who is not all he appears. (Are they ever in these novels? Boys seem to exist to lie to girls in many a young adult novel.) Mary has sex with the boy named Ted, and you can guess what happens next.

But Mary’s problem is that she is not your typical 16-year-old pregnant teen. She’s also the killer of a baby girl, which means there is no way under the sun that Mary will be allowed to keep and raise her growing fetus, nicknamed Bean.

Whew, that’s a lot of story and, for most of the novel, Jackson does a fine job relating it. We’re rooting for Mary against all odds. How can we not? She’s smart, seemingly not guilty of the crime and, hell, she even gets good SAT test scores. She wants to go to college. She wants a life for herself.

It’s all good. But somewhere in the second half of the book, the story goes off the rails. There’s a little too much mayhem at the group home, one too many visits from Mary’s odious mother. Then Mary herself begins to change her story until we’re almost not sure what her story is. It all gets straightened, out but by then the momentum has been slowed to a crawl.

It’s too bad because Jackson had a head of steam going. One wishes she had more editing help.

Novelists and editors these days seem to live by the dictum that more is more when, in many cases, less is more. Hey, the iconic bestseller Breakfast at Tiffany’s is well under 200 pages. You can look it up.