All of Us: A Young People's History of the World 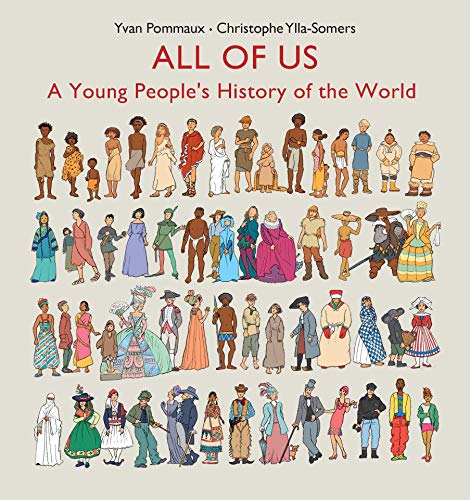 “a slapdash simplification of history to a cartoonish extreme. The young reader would be better served by looking at the pictures and rushing off to discover the actual history that goes along with them.”

Ambitious in scope, All of Us: A Young People's History of the World, presents an overview of the story of mankind from prehistory onward. The book is a beautiful object, with large pages, thick paper, handsome binding. The illustrations by Yvan Pommaux, from landscapes to maps to scenes of battle are gorgeous, full of the kind of details young readers will love to pore over.

The problem with a book of this scope is what gets included, what is omitted. The authors try very hard to provide a cultural balance, including all regions of the world, though inevitably some are forgotten. Easter Island with its mysterious heads is featured but Native Americans are reduced to one line about “native people” losing their land to a nebulous “we.”

They also bend over backward to be economically fair, explaining that the earliest civilizations “assigned value to things . . . We passed our homes and land on to our heirs,” though there is no historical proof of this relatively modern concept functioning then. The writer is on solid ground to admit that life in Ancient Rome is one thing for the wealthy, another for the poor. But does this need to be spelled out? That disparity has been true throughout time.

A major issue is the muddled timeline. The book starts with negative numbers, reading as “2 billion years ago,” then jumping to 9000 years ago with settlements in Sumer (normally considered as starting in 4500 BCE, which would be closer to 7000 years ago. The Iron age is mentioned later but the Stone Age is left out, though the Sumerians are described as “the beginning of metallurgy” (the Bronze Age?).  Also, the use of the term Sumer rather than Mesopotamia (which seems glaringly absent) will confuse English speakers who more commonly see that name for the civilizations blooming in the region of the Tigris-Euphrates rivers.

It only gets more confusing from there; –1100 is presented as a time of fierce nomad tribes from Central Asia invading Europe. Does this mean 1100 BCE or roughly a thousand years ago? From the later pages, it seems more likely to be 1100 BCE. But who are these nomads? Their weapons, clothes, use of bridles on their horses, all seem much more modern than that date would suggest. Those clues point to 1100 years ago, though it would mean the book skips around in time. Supposedly, these tribes “forever changed” Egypt, Asia, the Middle East, and the Mediterranean. What these changes were isn't specified, along with the name of these nomads.

The authors freely interpret intentions, as in the previously mentioned inheritance issue. They declare that monuments such as Stonehenge were used in religious rituals “to implore the sun, the moon, and the stars, which we considered deities. We questioned them about life, about death, about unexplained phenomena.” Do we really know that is what the Druids did there? We can guess, but to baldly state it like this makes a reader question the historical integrity of the text.

Later on, the authors claim that ancient Greece was novel in portraying ordinary people in art, another misleading statement. Athletes, worshippers, and the dead are depicted, yes, but not ordinary people in the sense a child would understand. There were no great statues of the local butcher. No relief carvings of the town gossip. Art was religious and political.

Other factual errors include a map from 800 BCE which features the label of Palestine, though no such region existed at that time (it would have been Canaan), an oddly political choice to make. Fast forward to the end of the Civil War in the United States, where the authors claim that “the freed slaves . . . were barely better off with the Yankees than they had been with their old Southern 'owners.'” And why is “owners” in parentheses? Are the writers questioning the fact that enslaved people were considered property? Is that fact up for debate?

Another strange lapse in the text is the stubborn refusal to give names. Alexander the Great, Columbus, and Hitler are described, but not identified. Why? An astronomer in India who first asserted the Earth was round is similarly anonymous. This doesn't provide a more grounded history. Rather it makes it more generic.

Despite the careful dance to be inclusive, Jews are mentioned as “increasingly shunned” in the 12th and 13th century, a light way to describe the way Jews were thrown out of their homes, murdered, or locked into ghettos. They're described, along with Muslims, as dominating the banking industry without explaining that Christians were not allowed to lend money, forcing that role onto other religions. Instead, the text serves up a stereotype of the money-grubbing Jew.

And finally, the role of girls and women is not given much attention until the list of “luminaries” in the back matter. Ancient Egypt could have featured Hatshepsut. Russia could have included a mention of Catherine the Great (were Russia given a page or two). Instead we reach the year 1000 (possibly, the chronology isn't clear) to learn that “Boys as young as seven or eight did very hard work. Girls waited for marriage.” Clearly girls of the lower classes worked just as hard as boys did.

It's hard to know what to make of this lapse, especially when after weaving through history in this highly abbreviated way, the book ends by looking at woman at long last. It comes out of nowhere, however, since their presence has been studiously ignored in the previous pages. The last sentence doesn't sum up the glorious, gritty history of us as humans, as one might expect. Instead the book's long journey ends with this: “While women's rights are still unrecognized in parts of the world, and even though true equality has not been achieved anywhere, our time will undoubtedly remain of one of radical changes in relations between the genders.”

It's a very odd ending to an odd book. One that could have been brilliant and in some instances still is. But overall, it's a slapdash simplification of history to a cartoonish extreme. The young reader would be better served by looking at the pictures and rushing off to discover the actual history that goes along with them.