All the Money in the World: What the Happiest People Know About Getting and Spending 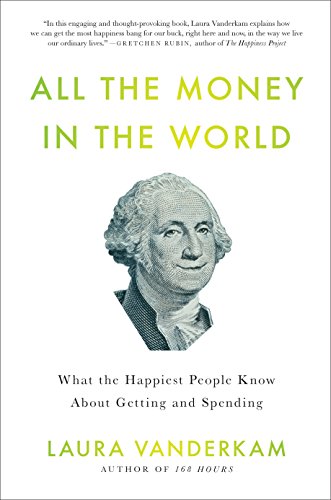 “Ms. Vanderkam's interesting book argues that much of what we want is within reach. ‘Every dollar is a choice,’ and often we make those choices without thinking them through. . . . many who read this book will have the means to attain happiness with far less than all the money in the world. And Ms. Vanderkam's new work will help us to reframe how we think about what we want and how we go about getting it.”

You would probably be challenged to come up with a specific list of what you would do differently were money not a constraint. Ms. Vanderkam’s interesting book argues that much of what we want is within reach. “Every dollar is a choice,” and often we make those choices without thinking them through.

Our normal inclination is to save on small things and ignore the very large ones. Some clip coupons or save a few dollars a week to find the least expensive gasoline station. But this represents a very small part of our spending, and sometimes it denies us our small daily pleasures. Foregoing a latté each morning may save you $15 a week, but if that is what gives you a small pleasure each morning, it may not be worth saving the money.

Or it may be that overpriced coffee does not float your boat, and you’d get more fulfillment from buying a book that transports you to another world for 20 minutes each morning. The small pleasures in life make us happy, and “as long as money is limited by its failure to grow on trees, we may be better off devoting our finite financial resources to purchasing frequent doses of lovely things rather than infrequent doses of lovelier things.”

Much of All the Money is based on work by psychologists Elizabeth Dunn, Daniel Gilbert, and Timothy Wilson. They draw on empirical research to suggest that people will be happiest if they buy more experiences and fewer material goods, use their money to benefit others rather than themselves, and buy many small pleasures rather than fewer large ones.

But perhaps a very large and major expenditure is your answer to what you’d do if you had the money. Say that you want to take a break from work and travel around the world. One couple decided to plan on a two-year sabbatical. Over five years they saved $80,000. They both worked, but used only one of their salaries for living expenses.

They rented a cheap one-bedroom apartment instead of living in a more luxurious space. Their car was a used hand-me-down, and they took public transportation as much as possible. For entertainment, they went hiking and had friends over for dinner instead of going out. And at the end of the five years of savings, they managed to travel for two years on the $80,000.

It is figuring out what we want that may, in fact, be the real problem. Once we figure out what we really want, and after we think carefully about how to achieve it, our goals are very often not so impossible as to require a bottomless wallet.

More than two decades ago, there was a large and very well publicized lottery jackpot. Walking down the street on a fall day in Cambridge, a friend asked a reviewer for NY Journal of Books what he would do if he won the jackpot. Without much thought (although the reviewer had never purchased a lottery ticket) he answered that he would take flying lessons. “Oh, you don’t have to win a lottery to do that,” the other academic told him. “A license would probably cost you around $2500.”

Well, two decades ago $2500 was a significant sum for an assistant professor—particularly at a university that seemed to think prestige was a form of compensation. But it was not out of reach, and so I signed up for flying lessons that same afternoon. I simply had never looked into the possibility of doing something I had always wanted to do.

Even people who are paid (poorly) to think are oblivious to what they want and how to get it. Money is only part of the problem. More often, the problem is that we do not spend much time thinking about what is important or enjoyable to us. We stumble onto it. We do not carve out paths to get there.

The book is an extremely useful way to reframe our view on money, but readers may find themselves frustrated if their economic situations are very different from that of the author, or if their basic wants are different. For instance, our homes are where we spend a great deal of our time. They can bring “pride of place” and be a constant source of life satisfaction all by themselves.

Living in a one-room apartment in a rundown building may not matter much if you’re one block from Zabars on the Upper West Side and don’t pay much attention to where you sleep. But living in a beautifully appointed home with a fancy kitchen, comfortable study, and plenty of space is likely to be what many people would do if they had more money.

In sum, “the best way to save is not to focus on cutting small pleasures. Instead, keep your structural expenses (housing, cars) low as a percentage of your regular income, so you don’t have to worry about trivial expenses like lattes, even as you’re still putting money away.”

Ms. Vanderkam suggests several other counterintuitive strategies. One is simply to make more money, which may be an option for a freelance writer, but is probably less workable for salaried professionals. Another is to give money to charity in ways that give us satisfaction. While spending money is not necessarily satisfying, psychologists have found that giving away money is highly correlated with happiness.

Writing checks just before the deadline for tax deductions is commendable, but there are ways to do it that will give you more contentment. We can think more about how we give money away and to whom. Feeling a connection with how the charity is distributed helps increase our sense of wellbeing.

And although saving for retirement is a responsible thing to do, it is unlikely to be much fun for younger adults. (Perhaps Ms. Vanderkam will think it is more fun when she reaches an age where it is enjoyable and realistic to think of how one might deploy those accounts). How to invest in a way that brings satisfaction is also a topic for which the author brings a fresh perspective.

Much of this book will apply only to readers who earn more than the average income. Below a certain point, sociologists have found that making more money does help Americans feel more satisfied with their lives. Above the average income, increases in earnings do not equate with feeling better.

For those who are in the bottom half, financial security is a goal in and of itself; and it is a goal for many in the top half as well. A disturbing number of Americans live in poverty, and many live from paycheck to paycheck. An unusual expense, like an automotive repair, can throw their precarious finances into ruin. Medical expenses are one of the most common causes for bankruptcy filings.

All the money in the world is an irrelevant dream to a working single parent who is trying to pay rent in a safe neighborhood and put food on the table. It is almost insulting to suggest that this growing segment of our society could make different choices in order to attain their goals.

But many who read this book will have the means to attain happiness with far less than all the money in the world. And Ms. Vanderkam’s new work will help us to reframe how we think about what we want and how we go about getting it.