All the Devils Are Here: The Hidden History of the Financial Crisis 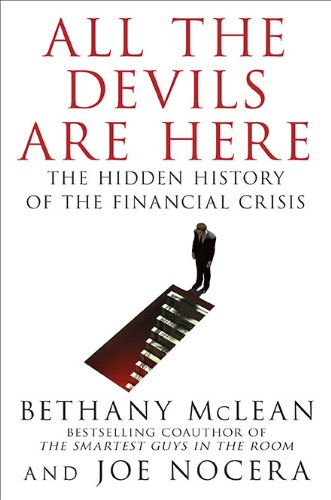 From its overheated title to its Big Journalism authors, it would be easy to dismiss All the Devils Are Here: The Hidden History of the Financial Crisis as the latest financial-crisis widget from the publishing industry’s assembly line.

But the meltdown of 2008 was as emblematic for its time as the Tet Offensive during another American adventure gone astray. And like David Halberstam in the The Best and the Brightest, Devils’ Bethany McLean and Joe Nocera (the former a writer for Vanity Fair, the latter for The New York Times) recount a disaster designed by those who believed their credentials, goals and institutions placed them above prudence, perspective or ethics.

Is it a definitive account of what led up to our financial crisis and recession? Of course not. McLean and Nocera draw greatly on other writers’ work and secondary sources (yes, they have done original sourcing as well). Yet they have provided a platform for the next generation of economic historians to understand what occurred in America’s financial sector over the last two decades—and it is not pretty.

Indeed, despite its necessity, this book is a depressing read. McLean and Nocera have, in effect, assembled a moral indictment of the gamesmanship, information asymmetry and opacity that has marked much of our economic growth and crash over the past twenty years—an era where fiduciary responsibility morphed into a casino mentality, and the dealers at Merrill Lynch, Freddie Mac, Goldman Sachs and others played against the suckers.

However, it’s not just people like former Fed chair Alan Greenspan, Merrill’s Stan O’Neal, Countrywide’s Angelo Mozilo and AIG’s Joe Cassano who helped construct our current recession. It’s also a goodly portion of American homebuyers, and if Devils has a weakness, it is in letting them off the hook.

We learn that many applicants didn’t put a dollar down when they took out too-good-to-be-true mortgages. Worse, almost a third of those obtaining sub-prime housing loans, Devils reveals, were either refinancing or purchasing a second home, some simply flipping properties to make quick profits in an overheated housing market. At the same time, the hallowed “four Cs” of lending—credit, capacity, collateral, and character—were thrown out the window.

Were such debtors victims, as some pundits have claimed? By no means; they are as responsible for our national disaster as the big financiers who collateralized their bad loans and sold them off to unsuspecting investors.

In the end, America becomes a nation drunk on leverage and debt, and the bartenders on Wall Street ready with a fresh bottle.

Then there is our cultural schizophrenia about moneymen. McLean and Nocera’s own publications have been complicit in this, as has most of the major media. At best, they have maintained a Jekyll-and-Hyde symbiosis—lionizing the technocrats and traders one day, accepting their firms’ advertising dollars the next; then, when trouble occurs, demonstrating the exquisite moral hindsight we have come to expect from the chattering class.
The truth, as philosopher Alisdair MacIntyre puts it in the October 20, 2010, edition of Prospect, is that skillful financiers transfer as much risk as possible to others without informing them of its nature.
The result is a failure to distinguish adequately between rashness, cowardice and courage. Successful financiers, as demonstrated repeatedly in Devils, do not—and cannot—take into account the human victims of the collateral damage resulting from market crises. Hence, the financial sector is the quintessential environment of “bad character” despite the fact that it appears to many a benevolent engine of growth.
The irony after reading Devils is to see how little has changed despite the multi-billion-dollar TARP bailout, Dodd-Frank legislation, and rhetoric of the Obama administration and Congress.

Example: This month, Reuters reported how Gordon Kanas, one of the new investors and CEO of Florida’s BankUnited, will make 68 million dollars on a 2.5 percent investment he recently made in the once-distressed company.

How so? From a guarantee on over eighty percent of the failed bank’s assets from the Federal Deposit Insurance Corporation—a gift, according to Reuters’ Rob Cox, that keeps on giving to BankUnited’s new owners. Payments that the regulatory insurance fund will make to BankUnited over the next few years carry an estimated net present value of about $800 million. As a result, BankUnited is widely expected to fetch a premium valuation to its $1.2 billion book value.

And who funds the FDIC guarantee? You do, Mr. and Ms. Taxpayer.

Mr. Kanas sends his thanks.