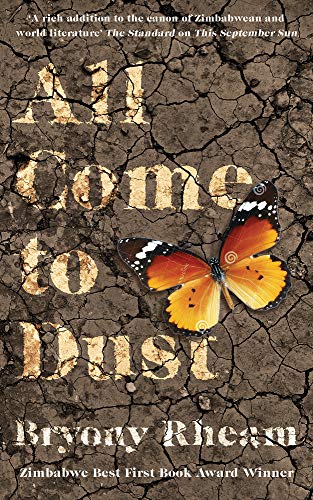 Byrony Rheam's well-crafted murder mystery takes a deep look at life in contemporary Zimbabwe. Much of the story takes place in a historically white suburb of Bulawayo where several of the inhabitants are hard up after the runaway inflation, but those who have access to hard currency—in one way or another—are doing much better. The latter include Marcia Pullman and her husband who run a tour operation but clearly have many lucrative side interests as well.

Then Marcia is discovered dead in her home with a letter opener sticking out of her chest. Young Chief Inspector Edmund Dube manages to reach the scene by wheedling a lift from Craig Martin, who is arguing about a speeding fine at the police station. Edmund realizes that there’s too little blood and it’s clear that the victim was dead before she was stabbed. The pathologist, a friend of Marcia’s husband, agrees and says she died of natural causes. Nevertheless, the question of why she was stabbed remains. The crime is pinned on the recently dismissed gardener, but Edmund believes there's a lot more to it than that.

“Something just doesn’t fit the bill . . . I’m looking for someone else. Someone with a grudge, someone who is clever, who sat and planned a murder meticulously. This is not a crime of passion. This is something far, far more complicated than that.”

Edmund identifies a cast of suspects: Marcia’s husband; the Pullmans’ maid and gardener; the peculiar neighbor; Janet Peters who was bullied by Marcia and has an invalid mother; a mysterious woman interested in Marcia's old records; and even Craig Martin, who has publicly threatened her. As the investigation progresses, he discovers that all of them had reasons to wish her dead.

However, Edmund is no Hercule Poirot; his confidence evaporates at the worst moments. His reaction to a compliment from Janet’s mother is revealing:

“’You have an intelligent face, Chief Inspector. I think you are a very clever man.’

“‘Thank you,’ replied Edmund, rather surprised and awkward.

“‘Believe me. When you’ve lived as long as I have you learn to separate the wheat from the chaff. In your life you will meet a lot of people who will try to make themselves appear clever or handsome or good. You will learn to see who is real.’

“Edmund had an odd feeling then, as though she wasn’t a real person, but a being, a messenger.”

To add to his troubles, the senior officers at the police station seem intent on thwarting his efforts to get to the bottom of the case, and he has no resources. In desperation, he eventually persuades Craig Martin to become an informal assistant to help him.

Superficially the novel seems to follow the usual tropes of the detective story genre, but the flashbacks to Edmund’s childhood, the rich characterizations, the slow revelation of the plot, and the subtle surprises remind one more of PD James than Agatha Christie. Nothing is as it seems.

All Come to Dust is one of the best African mysteries of the year.