All the Colors of Night (Fogg Lake) 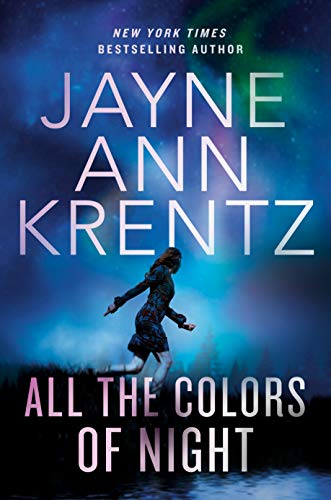 “All the Colors of Night is an entertaining, easy to read novel into which you can immerse yourself for a day or two.”

There are times, especially during prolonged lockdowns or stay-at-home health-related stints, that you simply want to read a book that will entertain you, occupy your mind for a while, and keep you interested in something other than what’s going on outside your front door or on your television and smartphone screens.

The prolific author of countless novels that take two full pages to list at the front of her newest offering, All the Colors of Night, Krentz has published most of these titles under three names: Jayne Ann Krentz for contemporary paranormal/romance; Amanda Quick for historical romance; and Jayne Castle (her maiden name) for science fiction/paranormal romance.

Her latest project under Jayne Ann Krentz, her married name, centers on paranormal happenings emanating from the mysterious village of Fogg Lake, Washington. It was here that secret government labs connected to the infamous Bluestone Project accidentally released a fog laced with unknown paranormal radiation, changing the local population into a community endowed with new and strange psychic powers.

An explosion sealed the labs behind tons of rock within a confusing network of caves, but bad actors from the psychic fringes and investigators from the New Orleans-based Foundation are hunting feverishly to find the labs and take possession of their legendary secrets.

All the Colors of Night is the second book in Krentz’s projected Fogg Lake trilogy, following up on The Vanishing (2020). It features Sierra Raines, a go-between for dealers of paranormal objects who has psychic abilities of her own, and North Chastain, a key member of an investigative team of “cleaners” working for the Foundation.

Sierra becomes entangled with North when she’s hired to assist him in tracking down artifacts that led to an attack on his father, Chandler Chastain—an assault that has left him in a psychic semi-coma.

As they race back and forth across the country in pursuit of Chandler’s attacker and the secret behind the artifacts, Sierra and North find themselves becoming more and more attracted to each other. Inevitably, the sparks begin to fly.

Krentz has referred to this novel as a psychic thriller, which is a decent description, but its categorization as romantic suspense is equally appropriate. An experienced romance author, Krentz knows how to work the love interest side of the street very effectively, and part of the suspense we feel as readers comes from waiting for Sierra and North to clear away the clutter between them and just get on with it.

The psychic thriller side of the story is also very interesting, but it’s a bit difficult to handle because the concepts and most of the characters are being carried over from the first novel or from other novels in other series. It’s busy and rather hard to follow right from the beginning, and readers not familiar with The Vanishing will constantly feel as though they’re playing catch-up.

Indeed, reading The Vanishing first might not be the only solution to this problem. Krentz also draws on characters and situations from her Arcane Society series written as Amanda Quick, including the Jones brothers (one of whom is Sierra’s employer). It’s rather confusing for newcomers, all in all.

Nevertheless, All the Colors of Night remains a fun book to read. Krentz has a good writing style, and her narrator has a very likeable tone of voice. She knows how to maintain a steady pace, and the novel reads very quickly.

As well, it has some secondary characters and scenes that are quite remarkable. While the theme of the book is centered on the poem “Hope and Love,” ostensibly written by Sierra’s father, a psychic poet, the scene in which her mother, Allegra, sings to Chandler at his bedside to bring a measure of calm to his disrupted aura is perhaps even more striking.

At the end of the day, All the Colors of Night is an entertaining, easy to read novel into which you can immerse yourself for a day or two. It’s recommended that you read The Vanishing first, but be sure to follow up with this one. The Sierra and North show is great fun for all fans of romantic suspense.