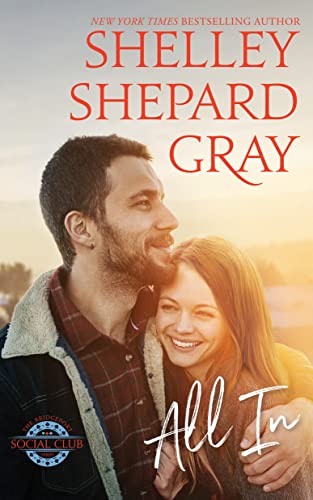 Meredith Hunt is accosted on the bike trail while jogging, and Ace Vance and his teenage son Finn come to her rescue. Shoved to the ground by her assailant, Meredith is dazed and injured, so when Finn chases after the guy who stole her backpack, Ace helps her to her feet. Noticing she is bleeding and in pain, he insists on taking her for treatment. She is embarrassed to accept help for no one ever came to her aid before. But knowing Finn from the school where she volunteers, he's not a stranger, so she acquiesces.

Finn retrieves her bag intact, though without her wallet. While being treated, their presence calms her, but she has reservations about their kindness, especially after Ace offers to pay her bill.

Ace and Finn are newcomers to Bridgeport, Ohio, from West Virginia. Finn's fickle and apathetic mother, never a role model for the boy, often left him alone, causing Finn to be the brunt of nasty gossip from his peers. A strapping and attractive lad, though somewhat shy and inept at relationships, Finn never had a stable life. Learning of the great school system in their new town, Finn is excited they moved, and he is a shoo-in for the varsity football team even though he's only a sophomore.

Finn's mother had been his primary caregiver, so now it's Ace's job, and his first allegiance is to his son. Though drawn to Meredith, he is fearful of jeopardizing his relationship with Finn. Fortunately for him, Finn likes Meredith and gives his dad the green light to pursue her.

Meredith owns a successful Pilates studio and her own home and is content with her life. When not teaching classes, she assists her best friend Emily at the high school. Highly independent, she loves working with the kids and contributing to the community.

Meeting a man as handsome and caring as Ace throws her off balance. Raised by a single mom after her alcoholic father left when she was young has made her self-sufficient. Yet her self-esteem is often crushed by her mother who continues showing disappointment that she isn't using her accounting degree or hasn't found what her mom considers an adequate husband.

Something about Ace intrigues Meredith. It's not just his kind and gentle ways, but she is attracted to the burly guy with tattoos and pierced ears; definitely not her usual type, but one cannot judge a book by its cover. Ace is a typical "man's man" who plays poker, drinks beer with his male friends on Friday nights, and enjoys tinkering around old cars. He believes Meredith is too classy for a "grease monkey" and doesn't think she could be interested in him. He comes off as a strong individual, yet when he is with Meredith he freely calls her "baby" or other endearments. Maybe he's a big softy after all.

Ace invites Meredith over for dinner and has her daydreaming:

"Curling back on the couch, she let the feeling of expectation wash over her. It felt pretty good. Kind of exciting. Warm. Closing her eyes, she started planning out her Saturday morning. She was going to need to run to the store and get some fresh lettuce for the salad and some powdered sugar and cream cheese for the frosting. Thinking about Finn and Ace's fondness for chocolate, she wondered if she should make two kinds of cupcakes. It would be overkill, of course, but she could leave a bunch with them and take any extras to the studio."

All In is the second installment in the Bridgeport Social Club series. Several chapters' headings include either information about poker or learning the different aspects of Pilates. Though Gray is well known for her Amish inspirational novels, this lighthearted sweet romance is filled with well-rounded characters highlighting the bonds of friendship and love of family.