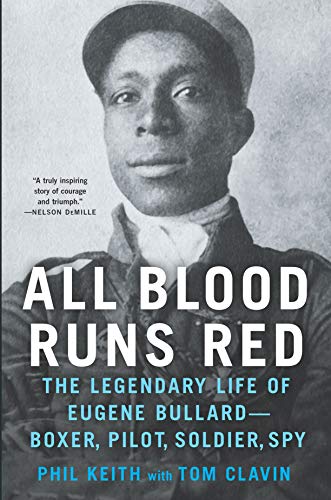 Eugene Bullard was born in Georgia, the son of a former slave and a Native American woman, but he was determined from a young age to escape the limits put on people of his race and background. All Blood Runs Red tells the extraordinary story of his life, based heavily on his own unpublished autobiography and contextual historical records.

It's a complicated story since Bullard crammed four lives’ worth of events into one man's experience. Growing up hearing his father's tales of a French origin in the sugarcane plantations of Haiti, Bullard considered France the promised land, a place where he would be treated as an equal, not oppressed by Jim Crow laws. Whether the Bullard family had any real connections to Haiti or France is impossible to validate, but the authors, as they do throughout the book, do a good job of laying out the evidence and possible variations.

Whether the stories were true or not, Bullard was inspired by them to leave home at a young age and get to France however he could. He stowed away on a steam ship, making his way to Glasgow, then Liverpool, and ultimately to London. In England, Bullard found his first calling, boxing. He was small, but agile and quick on his feet. He made a name for himself, along with a steady income and a comfortable life. Still, France lured him, and he got to Paris in 1914, just in time to enlist in the French Foreign Legion for his next career.

With his characteristic good humor, charm, and determination Bullard impressed his fellow soldiers and officers. He risked his life to save others in two of the biggest battles of WWI, the battle of Verdun and the Somme. He was wounded, awarded medals, and after serious injuries, was released from the brutalities of trench warfare.

But Bullard still wanted to fight for his adopted country. He saw his chance in aviation. As the authors explain, “Designation as a pilot in the French Air Service had no hard-and-fast curriculum and really didn't have a specified timeframe in those very early days There were a succession of hoops to jump through and a trainee would get his aviator's badge only when the instructors and the commanding office of the training squadron believed the man was ready, or at least a greater threat to the Huns than to his fellow cadets.”

This was early in the history of aviation, so early that a trainee would learn to fly by themselves, the cockpit only having room for one. After ground training, the new pilot would learn by doing. Ballard proved an apt pupil and was made “Pilot Number 6950 in the French Air Service on May 5, 1917,” the first African American pilot in the military. The American military didn't allow any African American pilots until the Tuskeegee Airman in WWII. Bullard made the news all over France, “but news of this singular accomplishment was totally ignored in America.” Another black pilot, Ahmet Ali Celikten, of Turkish-Nigerian descent, flew for France, but not gunnery missions. Bullard was well aware of his ground-breaking role. As he wrote, “I was determined to do all that was in my power to make good, as I knew the eyes of the world were watching me as the first Negro military pilot in the world. I felt the same way . . . Lindbergh felt when he was the first to fly from New York to Paris, France. I had to do or die, and I didn't [want to] die.”

Ballard succeeded on the ground and in the air, his courage and achievements recognized by the Military Medal, Croix de Guerre, Volunteer Combat Cross, Combatant's Cross, Medal for Military Wounded (twice), World War I Medal, Victory Medal, Voluntary Enlistment Medal, Battle of Verdun Medal, Battle of Somme Medal, and the American Volunteer with French Army Medal. After the war, he was honored with a personal meeting with General DeGaulle and awarded the French Legion of Honour, the highest possible recognition for military or civilian merit.

All of this would be enough for one man's life, but after the war, Bullard settled in Paris, running nightclubs in Montmartre. There he met writers such as Ernest Hemingway and F. Scott Fitzgerald, artists such as Pablo Picasso and Man Ray, plus the talented Cole Porter and Josephine Baker. After the glitz of the ’20s, the ’30s offered Bullard yet another chance at military adventure. His nightclubs were perfect places to spy on the Germans, there themselves to spy on the French. Bullard was enlisted early on to work with the Resistance. He not only passed on what he heard in conversations (conversant in German from his early days as a stowaway on the steamship), he passed on messages, even documents and film, to different members of the Resistance. He had several close calls but was never caught.

Still, he faced real danger as France was invaded, then occupied. The authors do a superb job of showing the series of lucky meetings with former WWI comrades that got Bullard through France, Spain, and ultimately back to the United States. If a cat has nine lives, Eugene Bullard in this telling, had at least a dozen.

Back in America, Bullard faced racism once again, but never one to be defeated, he reinvented himself once again, this time as the advance man to Louis Armstrong, arranging his tours throughout Europe and the United States. The book ends with one last story of an incredible chance encounter, this one in an elevator, that finally brought Bullard fame and recognition in his native country, long after he was given it in France. Bullard's charm and openness early in life rewarded him later. His is a truly remarkable story of a truly remarkable life, and All Blood Runs Red does it justice.