All In: An Autobiography 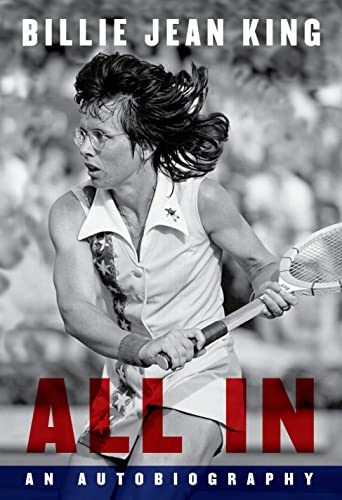 “I didn’t start out with grievances against the world, but the world certainly seemed to have grievances against girls and women like me. . . . [P]ursuing your goals as a girl or woman then often meant being pricked and dogged by slights . . . [I]t made no sense to me.”

Billie Jean King is viewed as one of the best women tennis players, and during her career risked suspensions as she advocated for equal treatment for women players in opportunities and prize money.

All In is King’s long-awaited autobiography and it’s a pip of a read. Word to the wise: Get past the first 130 pages because that’s when the really good stuff gets going.

Think of the first eight chapters as Billie Jean King, the early years ad infinitum. Too much redundancy, and while it can be a slog, there are nuggets of memorable moments.

Once past the slow-moving lobs, right around chapter 9, the pace picks up and it’s more like watching King on the court. She attacks the topics, the transgressions, the setbacks the way she attacked the net.

For those who only saw her on court or in interviews, it’s fun to learn she has a temper—and is not afraid to show it. She’s impatient and does not suffer fools well. That is not a surprise considering she is such a formidable opponent.

King admits that 48 years on, her historic “Battle of the Sexes” against Bobby Riggs remains a conversation starter for many people. No one expected her to win—no one except Billie Jean King. When her brother R.J. asked about betting on the match she responded, “Bet the house.”

She did not underestimate Riggs; he, however, did not reciprocate. Riggs figured King would fold, just as Margaret Court had done. That was his first mistake. King made him play, and he couldn’t keep up. Final score: 6-4, 6-3, 6-3—straight sets. When asked, Riggs said, “She was too good—she was never extended. She was playing well within herself. It was over too quickly.” At least he had enough class to admit she smoked him.

An autobiography isn’t worth much if the subject is reluctant to talk about the bad times but King does that with great aplomb. She reveals her struggles with her eating disorder, coming to grips with her sexual orientation, and how they affected her mental health. King does not shy away from discussing her relationship with Marilyn Barnett and the Barnett’s galimony suit that outed King to the world. She discusses it all in an open, honest, and, at times, dispassionate way.

Yet she powered through that adversity and came out of the experience better known and appreciated than ever before. Her story is one of resolve and determination to weather whatever gets thrown in her direction. This is a woman who is secure enough to share things most people want to hide.

Autobiographies are particularly special when there are surprises. And King does not disappoint because she reveals that she married Ilana Kloss in 2018, legally cementing her 40+ year relationship.

And, of course, the revelation that Elton John’s hit song, “Philadelphia Freedom,” was written for, you guessed it, Billie Jean King. Those are the kinds of tidbits that make this book a must-read.

The intensity with which Billie Jean King lives her life is palpable throughout the book. She is no shrinking violet, and at 78, remains a formidable force. Her advocacy skills are prodigious as her involvement in myriad social causes over the past 50 years attests. Her activities make one wonder whether she ever pauses long enough to take a breath.

Readers will come out at the end with newfound respect and admiration for this remarkable woman who used her position and her platform to promote a future for women and girls that continues to resound today. Most folks would settle for a fraction of what Billie Jean King has accomplished.

King offers some insight when she writes, “[I] think everything we go through is a process of self-discovery. . . . You have to have the sensitivity to take in everything and yet a certain obstinacy when it comes to ignoring your fears, . . . calculating the risks and then going for broke sometimes anyway.”

Billie Jean King’s life makes one wonder if Shakespeare had her in mind when he wrote, “Oh, when she’s angry, she is keen and shrewd!. . . . And though she be but little she is fierce.”