All About the Story: News, Power, Politics, and the Washington Post 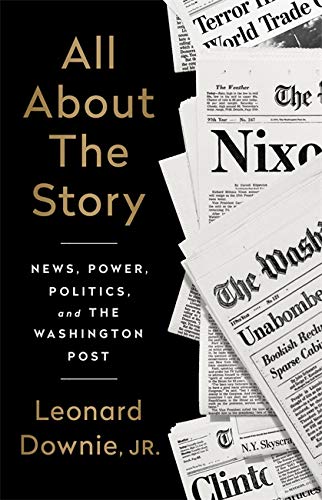 The role of the news establishment and the American newspaper has undergone several profound transformations in American history. Once a partisan tool of the parties, after World War II newspapers, especially national ones, became relatively centrist and politically neutral, serving the classic model of both reporting essential facts, readers needed to—especially   asan investigative weapon—hold government officials accountable. The heyday of these functions comes to a head in the 1970s when newspapers such as the Washington Post covered the Vietnam War, Richard Nixon, Watergate, and the abuses of presidential and governmental powers. All About the Story is an autobiography of that era, telling also about its possible coming to an end and rebirth in new era.

On one level this book is the autobiography of Leonard Downie, Jr. He was a reporter who became the executive editor of the Washington Post in 1991, serving in that role until 2008.  However, Downie was at the paper during an earlier era when Katharine Graham was the publisher, Ben Bradlee the editor, and Bob Woodward and Carl Bernstein reporters. All of the individuals are legends in journalism.

Through the eyes of Downie the story of the Washington Post is told. He tells of the confrontation between the paper and the US government as the former sought to publish the Pentagon Papers: the secret government reports of US involvement in Vietnam. This is a story not only about censorship, the rivalry with the New York Times as America’s premier newspaper, but also a fight up to the US Supreme Court to vindicate First Amendment Freedom of Press rights. Downie talks about the determination and decisions by Graham and Bradlee to publish the papers and fight the government, thereby setting the tone for a newsroom and journalistic standards that are still heralded today.

The tone set with the Pentagon Papers provides the context for the pursuit of Richard Nixon and Watergate. Here Downie provides valuable background information on how the paper supported Woodward and Bernstein as they pursued the facts. It is a story of who “Deep Throat” was the famous source of those reports, and the way Bradlee and the newspaper supported them to eventually find the links that implicated the president to the break in and cover up. In reading this chapter one learns new details about the personalities involved and the brinkmanship that occurred several times as editors and reporters made choices that were often risky and placed them in powerful conflict with the government.

But the book moves beyond Vietnam and Watergate. It discusses major items in the news ranging from the Jonestown massacres, covering Charles and Diana in England, the Clinton Administration and the president’s sexual affairs and impeachment, the Unabomber, 9/11, the government outing CIA operative Valerie Plame. Each of these chapters provides useful and often compelling insider stories on the telling of the news, the personalities, and the choices made. All of this is interesting in terms of a book, but there is yet another layer to this autobiography.

What makes All About the Story most compelling is that it is about the business of the news. It is not simply a chronicle on the unvarnished pursuit of the truth; it recounts the  business of the news industry. It discusses how the family-ownership under the Grahams influenced news choices, supporting reporters and editors. It was at a time when newspapers were at their nadir. But as television, then cable, and then the social media rose, traditional journalism was challenged, putting newspapers into a readership tailspin that forced a change in the direction and publication of the news. Finally, the book brings us to the sale of the Washington Post to Jeff Bezos of Amazon, exploring the implications of this for both the paper and journalism in general.

One walks away from the book looking at a golden time or era for journalism and the challenges it faced from a digital world, a fragmented media market, and a partisan political atmosphere. It tells about the end of that era and the need to adapt and the struggle to remain relevant and maintain standards. It paints a picture of noble people making good choices, leaving one to wonder in the era of alternative news realities today if things could be different if different individuals making different choices, would yield a better approach to the news that was described in this book, or if in the end this is the epitaph of an era that is gone forever.