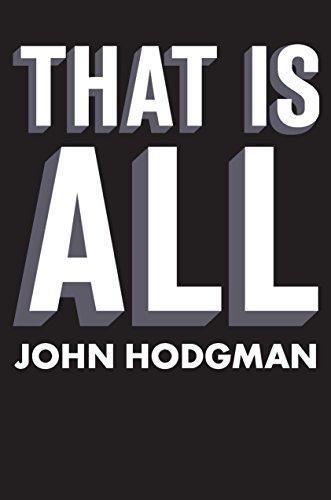 “John Hodgman is a juggernaut of funny!”

That book—the sequel to The Areas of My Expertise, the book that drove John Hodgman to fame and fortune, to regular appearances on “The Daily Show,” and to the star of television’s living Window’s PC in that famous series of Mac ads—started on page 256.

Together, John Hodgman’s first two books were the beginning components of a proposed trilogy of books that would, all together, allow Mr. Hodgman the pleasure of “reaching with long-fingernailed hands to the very end of my on great contribution to the world: COMPLETE WORLD KNOWLEDGE.”

Indeed, this new volume, That Is All achieves Mr. Hodgman’s goal of three volumes, if not the published presentation of complete world knowledge:

“One question has dogged this project from the start: How could a single person, even an expert like me, ever truly to contain complete world knowledge within a single book?

“EVEN A SINGLE, THREE-VOLUME BOOK WITH CONTINUOUS PAGINATION?

“For me it is true that as time passes, new knowledge is generated. And, as it is generated, I HAVE LEARNED IT? And when I did not have time to learn it, I HAVE MADE IT UP. And you would think that this process could go on FOREVER and UNCEASINGLY. Just like fame and fortune. Just like life.

“And you would be correct: COMPLETE WORLD KNOWLEDGE will never be complete. That is, SO LONG AS THERE IS A WORLD.

“But luckily, this is not going to be a problem for much longer.”

Okay, here the reader takes a bit of a breather. Has a bit of a think. Having had the book dropped on his desk with a bit of a thunk, he opened it, ignorant. And noticed two things pretty quickly that caused a bit of alarm.

First, That Is All begins on page 607. This suggests that, somewhere out there, there are the missing first 606 pages. (It turns out that they make up the first two volumes of a trilogy, which the reader, being almost completely free of hipsterdom, had missed out on.)

Second, it only took a few pages for the reader to notice that at the top of every page in That Is All there is a running calendar with a bit of information for every day—for every single day of the year, with each new page representing a new day. This suggested that the new volume would have at least 365 pages, making for a total of 971 pages in the trilogy—which means that, together, they are nearly long enough to comprise a biography of Spencer Tracy or Jane Fonda!

The overriding question, of course, is, since he missed out on more than six hundred pages of text, will the reader feel lost and alone in reading the new volume? Will it be akin to viewing the third Planet of the Apes film without virtue of having seen the first and the second?

The answer is that it is pretty much the same, given that the Planet of the Apes films are easy to follow and feature, if the reader’s recall is what it is, recaps of past films in the first few minutes of each new film.

In the same way, John Hodgman is good enough both to bring those of us who missed the first book up to date before going further and smart enough to state his thesis for the new book right up front, where most readers will be looking for it:

“As you know, this book has been published in 2011. If you own a calendar, you will know that this is just ONE SCANT YEAR before the year 2012. And if you own a Mayan Long Count calendar, then you probably have a HUGE house, because those things are gigantic and made of STONE.

“And you also know that after December 20, 2010, there is nothing. The calendar ends.

“Now, I’m not saying that the world is necessarily going to end in 2012, consumed in fire and blood, leaving only John Cusack alive.

“That’s what THE ANCIENT MAYANS are saying. BLAME THOSE GUYS.”

Having already written about the world’s past in his other books (and the reader does yearn to read them one day, if only to look over John Hodgman’s list of 700 names for Mole Men), the author now looks to our future, what little remains of it. In that ticker tape of dates running across the top of the page, he prepares us for what is to come:

March 2, 2012: In Eugene, Oregon a 12-year-old named Dwayne Shuster buys a fortune-telling fish, and it burrows into his palm.

April 15, 2012: Jonathan Franzen appears on “The Ellen DeGeneres Show.” He teaches her a new dance based on his observations of suburban ennui, and then silently hands her a plain manila envelope.

December 4, 2012: Stephen King is running out of food and water.

And so it goes. John Hodgman’s nearly 400-page bucket list for Planet Earth was not so much written as constructed, baked, as it were, like an English muffin, into which, like the old commercial promised: there’s flavor packed into every nook and cranny.

Not a page goes by, not a paragraph or a sentence, without a joke. Some are elaborate and take entire sections of the book to pay off. Others, like December 4, leave the reader reeling with laughter—often not really knowing why.

But this much is known: John Hodgman is a juggernaut of funny! Would that other books in the reader’s pile were half as funny—even a third. Of course, a life history wasted reading science fiction novels, watching bad horror films, and reading Marvel comics helps. (Thor comics offer one way of already being familiar with Ragnarok without having to wade through the Norse myths.)

Here, instead of the names of Mole Men, John Hodgman gives us a list of conditions that will foretell the return of the “Ancient and Unspeakable Ones” (“the ravenous moveable forest awakens and feast on blood” “Nick Nolte reads the Book of Revelation”) and then he lists for us the actual names of the “700 Ancient and Unlistable Ones” (#8 The Ageless Tog-Aggoth, 87th President of the United States, #9 His Dread Sister, Togatha, # 10 His brother, “Broadway” Joe Tog-Namath). And the laughs to be found in reading the final two sections, “The End” and “The Beginning” are honestly, in and of themselves, worth the cost of all three books. (Hint: don’t trust Billy’s dog. Not for a minute.)

There are things in That Is All—its entire title is (suck in some air for this one): A Third Compendium of Complete World Knowledge, Now and Finally Complete, As Set Down By Me, A Former Professional Writer and Current Deranged Millionaire, Who Is Known in Your Language as John Hodgman, at Last in Such Sufficiency as to Report That Is All—that the reader will carry for years to come, including this, from Table 52: “The End-Times Myths of The Nantucketeers:”

“When the end is near, the enormous sperm-whale skeleton hanging from the roof at the Whaling Museum will break free from its chains and slowly crawl up Main Street, wailing horribly for its lost spermaceti. As it passes, all of Main Street’s cobblestones will melt and fuse, horribly, into a normal street.”

It is impossible to know where John Hodgman gets this stuff, what visions or dreams haunt him, what trios of ghosts visit him in the night.

Two things, however, can be concluded. First, that were we compiling a list of the funniest and most entertaining utter wastes of time, Mr. Hodgman’s trilogy would top the list. And second, that it is likely a very good idea to be standing nowhere near John Hodgman on the evening of December 20, 2012.